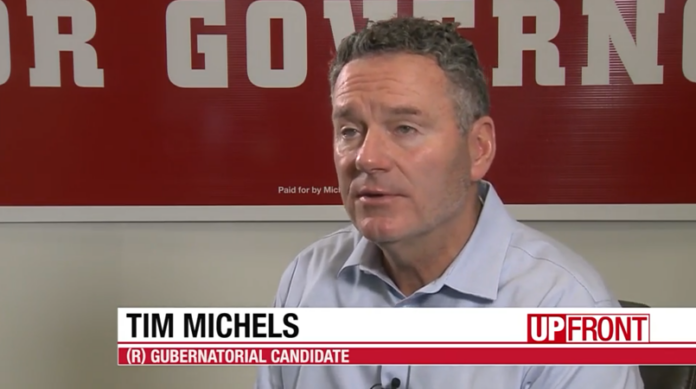 GOP candidate for governor Tim Michels says he talked to Donald Trump for three to four minutes ahead of his public endorsement, but the former president didn’t commit to campaigning for him ahead of the Aug. 9 primary.

“He didn’t say anything about that,” Michels said on WISN’s “UpFront,” which is produced in partnership with WisPoiltics.com. “He didn’t say whether he was going to come to Wisconsin or not. I didn’t ask him. I didn’t think it was my place to ask, ‘Are you coming or not?’ He’ll make up his own mind.”

Michels maintained his recent shift in positions about the Wisconsin Elections Commission, now calling for it to be eliminated, wasn’t related to Trump’s endorsement.

“It had nothing to do with that,” Michels said. “I took a hard look at WEC. I did my homework, and I realized it was unsalvageable. We will come up with something better and improved.”

Michels said he would not support putting Wisconsin’s secretary of state in charge of elections.

Trump has insisted the 2020 election was stolen. When asked, Michels wouldn’t dispute that or say there was no widespread fraud as courts and election officials nationwide have upheld the election.

“I think what everybody is confident of is that there was problems with the election,” Michels said. “Nobody is sure what the extent of it was.”

Gas prices in Wisconsin continue to reach record highs, including over $5 a gallon in parts of the state.

White House economic adviser Jared Bernstein says the administration is doing “everything we can” to help ease prices at the pump and all areas of inflationary pressure.

“It’s tough to be in the forecasting business right now to say the least because there are just so many uncertainties out there,” Bernstein said. “COVID is still upon the land. We have Putin’s unjust and unprovoked invasion of a sovereign nation of Ukraine. We have China dealing with COVID and their lockdowns. I will tell you this — every economic forecast I’ve seen, and I track all of them, have inflation going more slowly at the end of this year than at the end of last year.”

This week the U.S. House is expected to vote on a package of gun reform bills that passed the House Judiciary Committee along a 25-19 party line vote.

Wisconsin Republicans Tom Tiffany and Scott Fitzgerald sit on the committee and both voted no.

“It shows this is a hastily created piece of legislation that is a knee-jerk reaction to the unfortunate incidents in and around what happened in Texas,” Fitzgerald said.

Fitzgerald said he won’t back proposals to ban or raise the age to buy assault rifles or expand background checks. He introduced an amendment that would have added requirements and funding for school safety upgrades, which failed.

“That is not what this package includes,” Fitzgerald said. “The package includes kind of a hodgepodge of many different concepts and bills that don’t even come close to what I think would be the needs of America when it comes to trying to provide this physical security for these schools.”

Meanwhile, a bipartisan group of U.S. senators is working on a narrower set of bills that includes discussions around expanded background checks and incentives for states to pass red flag laws.

That package that would need 60 votes to break a filibuster.

“We’ve got to do everything that we can to make that the case,” Democratic Sen. Tammy Baldwin said. “You know 60 votes out of 100 votes in the Senate when 90 out of every 100 people strongly favor universal background checks, this shouldn’t be a heavy lift for them. And it’s so sad they’re instead of prioritizing the children of this nation, they’re prioritizing the NRA and the gun makers.”

The Wisconsin Institute for Law and Liberty says it plans no further action after the Kiel School Board said a Title IX investigation involving three students has ended.

“Unless something happens that I don’t anticipate happening, no I don’t think there’s going to be a lawsuit here,” Rick Esenberg, president of WILL which is representing the students who were under investigation, told “UpFront.”. “We wanted the school district to end an investigation that we think was improper. The school district has done that.”

The investigation prompted bomb threats that targeted facilities across the city and forced the school district to switch to virtual learning, postpone graduation and cancel its Memorial Day parade.

WILL said the investigation involved three eighth-grade boys and a complaint alleging the boys refused to use the preferred pronouns of “they” and “them” when addressing a fellow student.

The case had received nationwide attention.

“As to whether or not WILL is responsible for it, I think the suggestion that we might be is very, very dangerous,” Esenberg said. “We are free in the United States of America to express our opinion, to assert the interests of our clients and we’re not responsible if some lunatic out there reads about it and acts irresponsibly.”