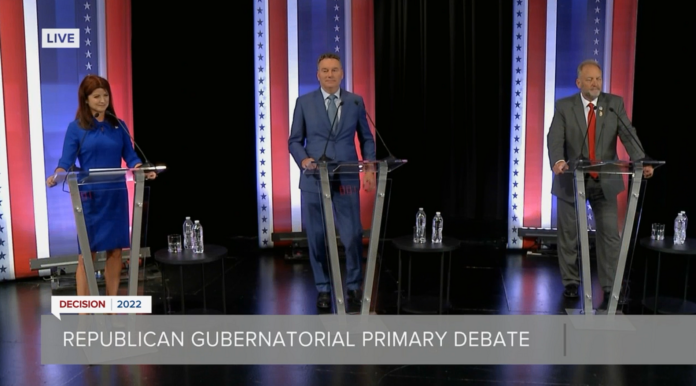 State Rep. Tim Ramthun, R-Campbellsport, was the only one of the three who committed to decertifying the 2020 election a priority if he’s elected as former President Trump has demanded.

Construction exec Tim Michels, who was endorsed by Trump, and former Lt. Gov. Rebecca Kleefisch both said it wouldn’t be a priority, though they knocked how the election was run.

Michels said issues with administering Wisconsin elections should’ve been “fixed in previous administrations.” But he didn’t take a direct swipe at Kleefisch, who served under Gov. Scott Walker for eight years. He said his priorities if elected include election integrity, crime reduction and education reform.

Trump recently posted on his social media platform that Michels “has no chance” unless “he remains strong” on the decertification issue.

Kleefisch again called for abolishing the Wisconsin Elections Commission and creating at new Office of Election Integrity at the state Department of Justice that she said would purge the rolls of dead voters, whose registrations are not currently active.

The three knocked Evers as weak and ineffective on various issues and accused him of being beholden to the state’s teachers union.

Kleefsich got a subtle dig in on Michels early in the debate, thanking him for “showing up,” drawing some groans from the live audience at Marquette University. It was a jab over Michels’ failure to attend a debate hosted earlier this summer by a conservative Green Bay radio show host.

The hourlong debate was hosted by WTMJ-TV’s Charles Benson and Shannon Sims. It is the only statewide televised debate ahead of the Aug. 9 primary, though the three are expected to participate in a town hall next month. It was co-sponsored by WisPolitics.com.

Tensions between Kleefisch and Michels have been rising in recent weeks with the former lieutenant governor going on the attack in her TV ads, accusing the business exec of supporting a gas tax hike and getting rich off government contracts. But there were no similar shots in the debate. The rules gave candidates 60 seconds to answer questions and allowed them additional time if they were mentioned by a rival by name. But it wasn’t invoked.

The moderators asked about the state’s 173-year-old abortion ban, which is now in effect after a U.S. Supreme Court ruling overturned a 1973 decision that guaranteed the right to an abortion.

All three said they back having state government cover the costs of paid family leave for parents to stay home with their newborns. The question was asked after GOP South Dakota Gov. Kristi Noem has made a push in her state, arguing it would help parents facing an unexpected pregnancy so they don’t feel like they’re in a crisis situation.

Kleefisch said she supports the current version of the law barring abortions, which only includes an exception for the life of the mother and rejected adding other exceptions or changes.

She also rejected the suggestion that treating miscarriages or ectopic pregnancies, when a fertilized egg implants and grows outside the main cavity of the uterus, are covered by the abortion ban.

“I like so many in the pro-life movement celebrated the Dobbs decision because I know little babies can’t afford lobbyists. It depends on people like all of us in this room, all of you at home, to defend the lives of the unborn.”

Ramthun said he opposes abortion in any form and called for making the adoption process easier.

Michels said he’s pro-life and called for helping women facing unwanted pregnancies to go through the adoption process. He didn’t directly address whether he favored adding exceptions to the 1849 law.

“There are two victims in the abortion,” Michels said. “There’s the baby whose life was taken away and the mother or would-be mother who will have that emotional baggage for the rest of their lives.”

Kleefisch said her plan to move the state to a flat tax of 3.54 percent would help keep Generation Z workers in the state. She said the Walker-Kleefisch administration focused on property tax relief, but younger workers aren’t buying homes at this point in their lives.

The state now has four income tax brackets that range from 3.54 percent to 7.65 percent.

She also called for doing away with any sort of vaccine or mask mandates in Wisconsin.

“Health care freedom is going to be an important thing to keep young workers in our state,” she said.

Ramthun, meanwhile, said the health care industry is losing workers because of the requirements that they wear masks or take what he called “the Frankenshot.” He also proposed taking school funding off the property tax rolls, though he didn’t say how he would come up with the $5.4 billion that property owners now put toward funding K-12 education.

At one point, Ramthun was asked about a comment he made suggesting he wanted to punch Assembly Speaker Robin Vos, R-Rochester, in the nose. Ramthun insisted he wasn’t directly calling for punching the speaker. Instead, he explained it was the best way to deal with a bully as some in the crowd cheered.

Michels said he backs incentivizing students to pursue careers in fields such as welding in high school and afterward without offering specifics. Asked if he would back those incentives for so-called “dreamers” — illegal immigrants brought to Wisconsin as children who go on to graduate from state schools — Michels said he’d have to see the details first. That prompted some groans from the audience.

“Every person on that stage would divide our state by tearing down our democracy, refusing to uphold basic rights, and taking Wisconsin backwards on reproductive healthcare,” she said.