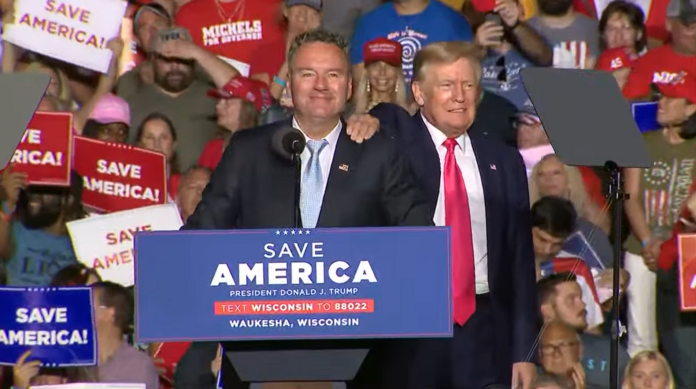 Former President Trump on Friday called Tim Michels “big time” as he urged voters to back the construction exec in Tuesday’s primary while dismissing his GOP guv rival Rebecca Kleefisch as someone running a campaign “of falsehood and lies.”

Trump also took aim at Robin Vos as he urged supporters to vote out the longest serving Assembly speaker in Wisconsin history after the Rochester Republican rebuffed the former president’s calls to decertify the 2020 election. Vos has noted multiple times that it isn’t legally possible to rescind the state’s electoral votes for Joe Biden.

The former president praised Michels, a construction company exec, as someone who does “big things” and helped him build part of the wall he began along the southern border. Meanwhile, he called Kleefisch a career politician and a political insider.

“Most of all, Rebecca Kleefish doesn’t have what it takes to beat Tony Evers,” Trump said. “Tony Evers is close to incompetent, but he’s going to win if he runs against Rebecca.”

Trump’s speech in GOP voter-rich Waukesha County was a mix of recounting his own administration, a list of grievances, praising Michels, taking digs at Vos and urging voters to support the speaker’s primary challenger Adam Steen, a self-employed investor who lives in Sturtevant.

He also focused part of his speech on falsely claiming he won Wisconsin in 2020 despite losing the state to Joe Biden by just less than 21,000 votes.

And Trump praised Michael Gableman, who Vos hired to review the 2020 election. The former state Supreme Court justice attended Friday’s rally, leading the prayer to open the event and was singled out by Trump for praise over his efforts. Trump said Gableman has endorsed Steen.

The Wisconsin Supreme Court a month ago ruled that unmanned absentee ballot drop boxes were illegal going forward. Since then, Trump has pressured Vos to decertify the 2020 results even though the ruling didn’t touch on that election and multiple legal experts have said such a move isn’t possible.

Trump took the stage more than an hour late — blaming weather for delaying his flight from the East Coast — and several hours after Michels had concluded his original remarks to the crowd.

During those comments, Michels only took one direct swipe at Kleefisch, noting her husband is a lobbyist.

Michels largely gave his standard stump speech, recounting his childhood, his 12 years in the Army and helping to grow his family construction business after leaving the service.

He told the crowd he hears from workers who claim the Dem Party now only care about “LGBTQ and drag shows,” vowed to fire “catch-and-release DAs,” and knocked both Biden and Evers.

It was during his knocks of Madison that Michels mentioned Kleefisch’s husband, though he didn’t call Joel Kleefisch, a former state lawmaker turned lobbyist, by name.

Kleefisch spokesman Alec Zimmerman slammed Michels for going after the former lieutenant governor’s family. He referenced a report that Trump talked with Michels during one meeting ahead of his endorsement about a tweet showing Kleefisch’s daughter going to a formal school dance with the son of state Supreme Court Justice Brian Hagedorn. He was a key vote in the 4-3 decision that rejected Trump’s state challenge of the 2020 results.

“Perhaps that’s acceptable in Connecticut, but the people of Wisconsin expect better,” Zimmerman said, referencing the home that Michels has in Connecticut. “It’s clear that Tim Michels’ campaign is desperate and can’t be trusted.”

After Gableman’s prayer, the speaking lineup then kicked off with Steen, who’s challenging Vos in Tuesday’s primary and has been endorsed by Trump.

Steen said some call Vos a RINO — a term Trump used for him in endorsing the challenger — while others refer to him as a “treasonous traitor” — a line he’s used before.

“He stopped listening to the people long ago, and he wants to keep the Wisconsin Elections Commission intact,” Steen said. “But worst of all, he continuously obstructs the real effort to find out what really happened in 2020.”

Recounts of the results in heavily Dem Dane and Milwaukee counties — where ballots were reviewed by hand — actually added to Biden’s lead. Meanwhile, reviews by both the nonpartisan Legislative Audit Bureau and conservative Wisconsin Institute for Law & Liberty found administrative issues, but no widespread fraud.

Evers spokesman Sam Roecker ripped Michels for bringing in Trump, “one of the most divisive politicians to pinch hit for him.”’

“Gov. Evers is focused on doing the right thing for our state and bringing people together to solve real problems, not caving to partisan radicals like Tim Michels, Rebecca Kleefisch, and the other candidates for governor,” Roecker said.