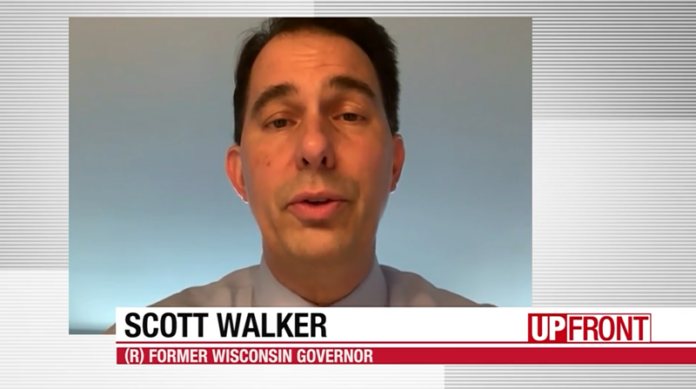 Former President Trump will rally with Tim Michels on Friday in Waukesha County, pitting Trump against Pence in another key statewide primary race.

“Donald Trump’s earned the right to have an impact not only in Wisconsin but across the country,” Walker said on WISN’s “UpFront,” which is produced in partnership with WisPolitics.com. “He did an effective job as president, although be mindful a big ally and partner in getting the job done was not only Mike Pence as vice president but people like Ted Cruz and others in the Senate.

“And remember in the primary in 2016, Ted Cruz actually carried the state of Wisconsin, so I would imagine his endorsement of Rebecca Kleefisch will have as compelling an impact as that of other endorsements for Tim Michels.”

Democratic strategist Joe Zepecki calls it a “dream scenario” for front-runner Lt. Gov. Mandela Barnes in the Democratic race for U.S. Senate after Tom Nelson, Alex Lasry and Sarah Godlewski all dropped out last week and endorsed him.

“The biggest thing it allows you to do is hit the ground running the morning after the primary,” Zepecki said. “They made a calculation. It wasn’t going to happen in terms of winning the primary so they could stay in and run through the tape or they could throw their support behind the nominee and get ready for the fall fight. That’s what appears to have happened here.”

Friday marks 10 years since a white supremacist attacked the Sikh Temple in Oak Creek, killing seven worshipers and likely more if not for the actions of former police Lt. Brian Murphy, who was shot and critically injured that day.

“Almost every officer who’s been involved in that feels like they’re out on an island by themselves,” Murphy told WISN’s Joyce Garbaciak. “People say, ‘I know what you’re going through.’ But unless you were actually shot or stabbed in the line of duty, you don’t.”

Murphy will speak at a vigil Friday to mark 10 years since the attack, and he’s reflecting not only on his recovery but on the continued mass shootings in America.

“I really don’t want to get into a whole gun talk because then people automatically assume you’re either this or that,” Murphy said. “And I mean, I don’t believe there’s a need to have a 100-round magazine. I don’t. But I also believe you have a right to own a weapon.”

Murphy received national recognition for his heroism and retired in 2013.

Murphy still needs regular injections in his throat to help his voice.

Rev. Greg Lewis, leader of Souls to the Polls, is working to energize Black voters ahead of the midterm elections and is concerned voters are disengaged.

“They aren’t hearing,” Lewis told “UpFront.” “The message that they have the power, they’re not hearing it, and now we have to make a concentrated effort now toward November to make sure they hear that message and maybe it will resonate in our community because our community is not really interested in what’s going on right now, so we’ve got really three months to make it clear that the power is here, and we need to use it.”

Lewis spoke at a rally in Milwaukee this past week as in-person early voting kicked off.

“Milwaukee will make the difference because right now the population of 40 percent Black is huge,” Lewis said. “That’s a huge population right now. It’s critical. Our white brothers and sisters are split right down the middle and the vote that comes out of these communities of color is vital. It makes the difference.”