Rep. Josh Zepnick says he’s put behind him allegations that he kissed two women without their consent at Dem functions. He says his constituents have, too.

Primary challenger Marisabel Cabrera begs to differ and says voters in Milwaukee’s 9th AD are still taken aback by the reports. And it’s one reason why she decided to seek a rematch with Zepnick after losing to him by 149 votes in the 2016 Dem primary.

“It’s not just that Josh has failed to be a voice of the people, but I feel he’s failed to live up to our progressive values,” said Cabrera, an immigration attorney.

But Zepnick stressed in an interview with WisPolitics.com that he’s stopped drinking and made a series of positive changes. He also questioned the reporting in the original stories that detailed the allegations; he said his accusers changed details from one story to the next and the coverage of his conduct was one-sided.

“I don’t think that what happened over essentially a period of five seconds in my life should define my entire career, let alone cause me to not be able to serve,” Zepnick said.

Cabrera’s 2016 challenge of Zepnick was her first run for public office. And the 42-year-old quickly jumped into the race again in December after the reports first surfaced and some Dems called for Zepnick to resign.

When it comes to policy, neither would support building a new prison or allowing citizens to carry concealed weapons without a permit.

Zepnick would like to see the additional state revenue from the sales tax on certain online sales go toward boosting the Earned Income Tax Credit. He said the sales tax disproportionately hits the poor, so they should benefit from the additional revenue. Likewise, he’d be open to increasing the sales tax overall by 2 cents so long as the money boosted the EITC, transportation and shared revenue.

Zepnick said part of his platform for seeking a ninth term in the Assembly is making sure Milwaukee gets its “fair share” of state revenue considering how much it sends to Madison.

She also said Zepnick has not been an effective legislator for the district. The south side district is 53.6 percent Hispanic, according to statisticalatlas.com, a website that breaks down data from the 2010 U.S. Census.

“It’s not enough to just say I support a certain issue. You have to bring attention to those issues and stay on them and effect some kind of change,” she said.

Still, the allegations against Zepnick are likely to be a driving factor in the race. Zepnick stopped caucusing with Dems following the allegations, and he was stripped of his committee assignments.

Immediately after the Capital Times first reported in December that two women had accused him of kissing them without their permission, Zepnick said he had no recollection of the alleged incidents, took the claims seriously and apologized to the women.

In the interview with WisPolitics.com, Zepnick described the original stories detailing the allegations against him as lopsided and unfair, adding descriptions of the allegations were “shifting and changing.”

There were no substantive differences in allegations raised in the original article and a follow-up in which both women called on Zepnick to resign, according to check of the stories.

Zepnick also said he inquired as to whether the two women would be interested in speaking with him, but he got no “indication that that door is open.” So he offered a public apology when the stories broke.

Zepnick added people in the district saw the reports on the allegations “for what it was and a one-sidedness to it.”

“They also know that people who are good people, like me, hardworking people and thoughtful, caring people, can sometimes make mistakes especially when alcohol is involved, and I’ve taken steps to correct that, which is what everyone should want to see happen,” Zepnick said. 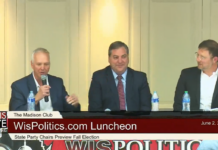