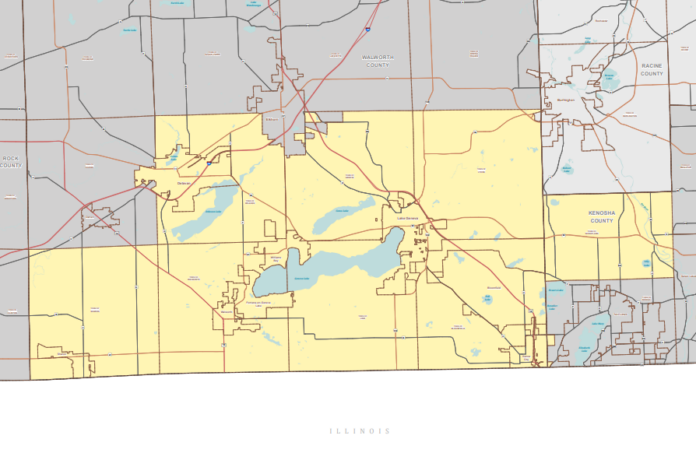 Tyler August, 39, who has held the 32nd Assembly District’s seat for 12 years, faces a GOP primary challenger in Bart Williams, 57, a consultant and former member of the New Berlin school board.

Williams looks to unseat August, a seventh-generation resident of Walworth County, in the Aug. 9 GOP primary race. Both candidates spoke to WisPolitics.com about their platforms.

The winner of the primary will face Democrat Adam Jaramillo on the ballot this November. The GOP-dominated 32nd Assembly District is made up of the eastern half of Walworth County, as well as parts of Kenosha and Racine counties.

Concerning controversy surrounding Wisconsin’s 2020 presidential election results, August, R-Lake Geneva and Assembly speaker pro tempore, said that there is no possible route toward the decertification of the electoral votes that went to President Joe Biden.

“There is no legal constitutional way for the state Legislature to decertify the election. Anyone who says that there is is incorrect and has not looked into the issue enough,” he said, describing this as “the constitutionally conservative position.”

Williams, however, said that he “witnessed fraud and fought against it.”

“The results of the November 3rd election … were fraudulent. They should be nullified, and either the electors [should be] awarded to the proper actual winners — Trump and Pence — or we should have a do-over,” he said. “Every way you can measure it, [the country] is in much worse shape because the election was stolen. None of those bad things happen if Donald Trump is properly inaugurated.”

The Legislative Audit Bureau’s nonpartisan audit of Wisconsin’s 2020 presidential election results revealed only four individuals who had possibly voted multiple times. The audit also found no important errors made by voting machines across the state.

August signaled support for a temporary suspension of the gas tax in an effort to bring prices down, as long as the lost revenue isn’t made up by bonding infrastructure projects.

“The issue with bonding is it’s not a fiscally responsible way to pay for roads. It’s why we’ve reduced the amount of bonding in each budget since I’ve been in office. Cash is always better to pay for roads, especially with interest rates starting to tick up”, August said. “I’m open to some sort of gas tax holiday as long as we can backfill the projects that need to be done with some of the surplus potentially.”

Williams is decidedly less open to suspending the gas tax.

“We do have some infrastructure and road repair needs, and once you get behind that, it’s hard to catch back up,” he said. “I don’t think you want to get rid of a tax just to borrow, likely at higher rates, and lose more money than you would have had if you just kept it in place.”

Both candidates see the state budget surplus — projected at $5.4 billion by Revenue Secretary Peter Barca — as an opportunity to return money to taxpayers.

August said he wants “once-in-a-generation tax reform” in the next budget to get the state closer to a flat tax, while Williams said that since the state over-collected, “it’s really not their money.”

Concerning the 1849 abortion ban that came into effect after the U.S. Supreme Court struck down Roe v. Wade last month, August said he’s in favor of the exception for the life of the mother currently on the books, but views any addendum with a complicated lens.

“We should definitely not remove the exception for the life of the mother, I think that’s an extreme position that very few Wisconsinites hold. As far as the rest … we need to actually know what we’re dealing with — does the 1849 law supersede other statutes, do other statutes supersede it? It’s a lot more complicated than a simple yes or no,” August said.

Williams expressed wariness about the life of the mother exception, saying that society has a “duty of equal care” to the mother and to the baby to try to save both lives.

“When we start making this exception, that exception, you make so many exceptions you can drive a Mack truck through it. And we’re in a worse spot than we even were before Roe v. Wade was thankfully overturned. SCOTUS did the right thing here and returned it to the states.”

About his opponent, Williams sees August as an establishment Republican whose time is up in the Assembly. Calling him “part of the failed leadership” in Madison, Williams says that he supports term limits, which would exclude August from office.

“I’m for term limits, no more than eight years for anyone in any office,” Williams said. “My opponent is not for that, he’s looking for his 13th and 14th years in the same office.”