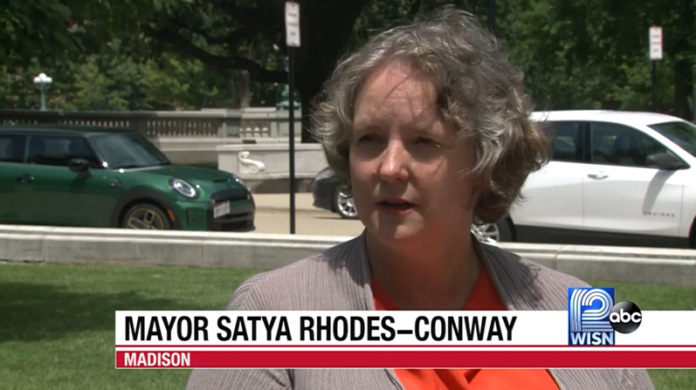 Madison Mayor Satya Rhodes-Conway says she’s learning new details about the suspected gunman in the Highland Park shooting and his time in Madison just hours after the parade shooting.

“I think we were very close,” Rhodes-Conway said about the potential for a second attack. “And I think the idea that the only thing standing between Madison and a mass shooting was the mindset of the shooter is very scary. That should not be our only protection.”

FBI officials notified Madison’s police chief that the suspect, Robert Crimo III, may still have been in Madison. Agents later recovered his cell phone in Middleton.

“We all do tabletop exercises,” Rhodes-Conway said on WISN’s “UpFront,” which is produced in partnership with WisPolitics.com. “And believe me, we’ll be doing more of them.”

Rhodes-Conway has been vocal in her push to ban assault rifles and is renewing her call for more congressional action after this past week’s revelations.

“This is a case where I think you need multiple solutions and multiple barriers to someone who is this disturbed and angry getting a weapon that can kill dozens of people,” she said. “And so yes, should there be stronger red flag laws? Absolutely. Should there be an assault weapon ban? Absolutely. Should we be thinking about better access to mental health care? Absolutely. Should we be trying to figure out and catch people who have these extreme opinions and predilection to violence before they get there? Absolutely. There isn’t one thing that’s going to solve this in America. We need a whole series of common-sense gun safety laws, and it has to happen at the federal level.”

In Michigan, for example, the parent of an accused school shooter is now facing multiple involuntary manslaughter charges.

“They have kind of a negligence theory there under their manslaughter law,” Adams said. “It’s still a novel prosecution, don’t get me wrong. Here in Wisconsin, we just don’t have anything like that. You can contribute to a minor committing a crime, that’s a crime. Buying a gun for a minor that’s going to use it unsupervised is a crime here in Wisconsin, but just kind of having a suspicion or having a bad feeling about what’s going on and not reporting it, that is not a crime.”

“I think given how important these elections are, and how high turnout will be, we will staff curbside so you don’t have to get out of your car likely every single day to make it convenient to return an absentee ballot,” Claire Woodall-Vogg said, executive director of the Milwaukee Election Commission, told “UpFront.”

Woodall-Vogg said roughly 40 percent to 50 percent of absentee voters used drop boxes in 2020, a practice that exploded during the pandemic.

“We know they were secure because we have 24 hours video surveillance,” Woodall-Vogg said. “We have security seals on them that show if someone has tampered with them. We count all of the number of ballots received in a box and double count that number when they are returned by our election commission staff to our warehouse, so there’s a lot of checks and balances that you don’t necessarily see in the post office.”

President Biden will travel to Saudi Arabia this week looking to improve U.S.-Saudi relations as several Wisconsin companies are in the midst of multi-billion dollar military contracts with the country.

“The relationship in many ways is multi-dimensional,” Fahad Nazer, spokesperson for the Embassy of Saudi Arabia in Washington, told “UpFront.” “It does have a very important economic dimension, but it also has a political and military dimension, as well as an important people-to-people dimension.”

Marinette Marine has a contract to build four ships for Saudi Arabia and Oshkosh Corporation is producing armored vehicles for the country. The Wisconsin Economic Development Corporation reported Wisconsin exported $171 million in goods and services to the country in 2021.

Rewind: Your Week in Review for Aug. 12