Yesterday, Donald Trump told one of his cruelest and most egregious lies to date: he claimedTrumpcare will protect people with pre-existing conditions.

THE TRUTH: Trumpcare actually guts protections for people with pre-existing conditions by possibly jacking up premiums to the point that they are wholly unaffordable.

This wasn’t a one-off. Trump went on to repeat the lie SIX times. Here’s the full exchange: 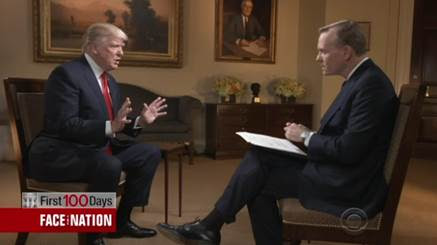 Here’s a reality check for the president:

New York Times: “Mr. Trump insisted that the Republican health legislation would not allow discrimination against people with pre-existing medical conditions, an assertion contradicted by numerous health policy experts as well as the American Medical Association.’

Politico’s Dan Diamond: “Trump appears to reverse himself on pre-existing conditions 2x in 2 mins—first by saying it’s guaranteed (it isn’t), then kicking to states.”

Washington Post: “President Trump tried Sunday to reassure anxious Republicans that the latest proposal to replace the Affordable Care Act would continue to protect those with preexisting medical conditions, although he struggled to fully articulate what form those protections would take.”

The Guardian: “Trump’s promise for healthcare act contradicts Republicans’ proposal” “It is not clear how many states would follow through on the power to make the sick pay more. Critics, however, have said any such change could make insurance prohibitively expensive for those with preexisting conditions.”

The Week: “He seemed to guarantee that the bill would protect people with pre-existing conditions. The American Medical Association and outside health policy analysts mostly disagree with this assertion.”

Huffington Post: “Republicans claim that other provisions of their bill, designed to reimburse insurers for expensive beneficiaries or to create separate programs for people with pre-existing conditions, would take care of people with serious medical problems. ‘They say we don’t cover pre-existing conditions, we cover it beautifully,’ Trump said on ‘Face the Nation.’ As multiple analysts have pointed out, these programs have never provided adequate protection in the past, even though Republican leaders like Ryan keep claiming otherwise.”

Star-Ledger: “3.8 million Garden State residents with pre-existing conditions could lose their ability to get adequate coverage. That’s on top of the 500,000 fewer state residents who would have insurance under the GOP alternative.”

RSVP today: From dairy to tech: How smarter immigration policy can help the Midwest workforce

Tom Still, president of the Tech Council, will moderate.

The program is set to run via webinar from noon to 1 p.m.