State schools superintendent challenger Lowell Holtz wrote in an email last January that a “reform group” asked him to run for the post and guaranteed it’d do “all of the fundraising, organizing, etc.” associated with the election bid, according to an email released by One Wisconsin Now.

But Holtz told WisPolitics.com that the group Wisconsin Needs Necessary Education Reform, or WINNER, ended up only helping him organize events, not fundraise, and that it only assisted him from around January to July 2016, when he was able to begin building up his own campaign staff.

Holtz corresponded with Pridemore in November 2015 from Holtz’s official email address at the district, in which they worked to set up a meeting before the end of the year.

He also sent a separate email in January 2016 that showed he expected Pridemore’s “reform group” would assist him should he decide to run. Holtz previously ran for state superintendent in 2009, facing four challengers in the primary and gathering 9 percent of the vote; Holtz got around 23 percent of the vote in yesterday’s three-way primary.

In the email, which he sent a day after he announced his retirement from Whitnall, Holtz said he was considering another bid for the office.

“My intent is to either run for State Superintendent again (I have been officially asked by a reform group… who will do all of the fundraising, organizing, etc.)…” he wrote.

Holtz announced his retirement from Whitnall on Jan. 11, 2016. His last day with the district was June 30.

Holtz told WisPolitics.com that WINNER has previously interviewed “more than a dozen candidates,” and that he had been selected by the group both times it held votes on the interviews.

He added that running for office with little experience wasn’t “something you want to do on your own.”

And in the weeks leading up to the general, Holtz said good press from One Wisconsin Now wasn’t something he anticipated.

“I’m sure One Wisconsin Now isn’t going to be a fan of me for the next seven weeks,” he said in today’s interview.

The release comes on the heels of news reports last week regarding talks on a possible deal between Holtz and then-candidate John Humphries to swap a promise for a DPI job in exchange for one of them leaving the race.

“Unfortunately, this doesn’t surprise me,” Evers’ campaign spokeswoman Amanda Brink said. “The last week we have really learned that Lowell Holtz is in it for Lowell Holtz.” 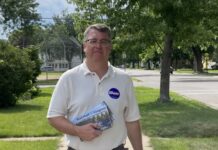