The President’s budget, competing Congressional budget resolutions, and the military reauthorization bill passed by the House, would all exceed the FY 2018 caps on defense, setting up a budget battle down the road. Lawmakers should step back and consider what has been achieved before sweeping away reforms that instituted real, enforceable limits on spending, and lead to total savings of $7,400 per household through 2017. Overtime these will grow, amounting to $16,463 per household by 2021 … if the limits are kept in place. 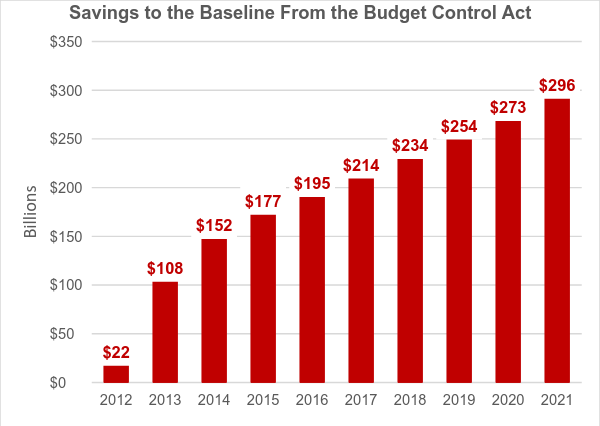 In 2015, The Congressional Research Service (CRS) sought to ferret out how the BCA reduced the budget baseline as a result of its spending caps and automatic sequestration. Together, the reforms reduced baseline outlays by over $1.6 trillion. Savings from debt interest payments contributes an additional $276 billion to the total, bringing the net savings to over $1.9 trillion.

Along with the gradual economic recovery, and the winding down of the of so-called “stimulus” spending, the BCA was a contributing factor in reducing spending as a share of GDP. Despite Congress watering down the discretionary caps and evading limits on defense spending through Overseas Contingency Operations funding, the BCA nevertheless helped to reset the budget on a lower trajectory. Learn more.

Keeping Up with the Jones Act

NTUF’s Charles Morris & Ari Boosalis explore how states are advancing – or impeding – the use of blockchain.

U.S. Sens. Johnson and Baldwin: Outside groups attempting to exploit tragedy in Waukesha must cease and desist; respect local authorities

WE Energies: Brighten up your holiday with energy-efficient lights