WASHINGTON – As a Democrat representing a state won by President Trump, one would think that Tammy Baldwin would strive to compile a middle of the road record instead of siding with the most liberal wing of her party. Right?
Well, instead of working across the aisle to represent her constituents, Tammy Baldwin has spent her time in Washington trying to endear herself to the far left. And in doing so, Baldwin has compiled a voting record nearly indistinguishable from extreme liberal Massachusetts Senator Elizabeth Warren. Since Warren joined the Senate in 2013, Tammy Baldwin has voted with Elizabeth Warren 96% of the time.
The NRSC is debuting a new digital ad campaign to inform Wisconsin voters of Baldwin’s liberal record in Washington and its similarity to that of the new face of the far left, Elizabeth Warren. The ads will be targeted on Facebook to Wisconsin voters, and are part of a national campaign targeting Senate Democrats representing states won by President Trump in November. 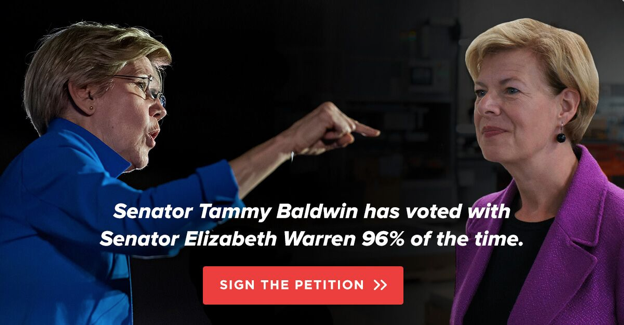 “During her time in Washington, Tammy Baldwin has positioned herself squarely on the left, voting with Massachusetts Senator Elizabeth Warren 96% of the time,” said NRSC Communications Director Katie Martin. “Tammy Baldwin may try to pose as a moderate as the election approaches, but her record shows that she has more in common with Washington liberals than with Wisconsin voters.”