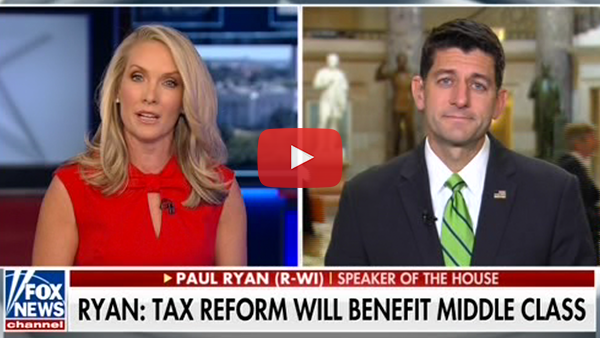 This afternoon, Speaker Ryan appeared on Fox News’ The Daily Briefing with Dana Perino to discuss how tax reform will help the middle class. Watch the interview here and check out the excerpts below.

Speaker Ryan: “We’re talking about cleaning up the tax code—making it so that nine out of 10 taxpayers can fill out their taxes on a post card and getting a tax cut for middle income workers who are living paycheck to paycheck, who are struggling to raise families, and getting our tax rates on our businesses down so that they can compete in this global economy. We know [if] we get tax reform done, that gets us faster economic growth. We know [if] we get tax reform done, that’s bigger paychecks. We know [if] we close loopholes, it’s a fairer tax system so that people pay their fair share and they don’t rig the system. So we’re basically trying to unrig the tax system, by getting rid of all these special interest loopholes. That’s good for America—it hasn’t been done since 1986, Dana.”

He also talked about the importance of the House acting on the budget this week to set up tax reform:

Speaker Ryan: “This budget, it allows us to do things like tax reform. So this really puts the tax reform train on the tracks. We’re very excited about that. We think it’s going to be one of the biggest things we can do to improve people’s lives, get this economy growing, get people faster wages, bigger paychecks. So that’s a huge effort of ours and we’re excited to work on that this week.”