Vukmir has campaigned on gutting the ACA protections for Wisconsinites with pre-existing conditions, and Pence in August said that Republicans need Vukmir in the Senate to pass a GOP repeal plan that would gut the protections

MADISON — “We made an effort to fully repeal and replace Obamacare, and we’ll continue with Leah Vukmir in the Senate. We’ll continue to go back to that.” That was Vice President Mike Pence‘s promise when he visited Wisconsin in late August to fundraise for Republican U.S. Senate candidate Leah Vukmir.

Now, Pence is today back in Wisconsin, and again seeking to boost Leah Vukmir so that she can help Washington Republicans repeal the Affordable Care Act and gut protections for Wisconsinites with pre-existing conditions. According to the Green Bay Press Gazette, “Pence will arrive in Green Bay Wednesday afternoon for a fundraiser to support Gov. Scott Walker and U.S. Senate candidate Leah Vukmir.”

Here’s a photo from earlier today: 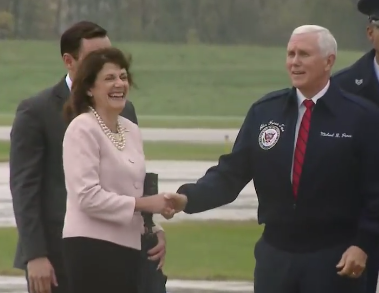