Citizen Action of Wisconsin: Everyone with love in their hearts must do more to interrupt systemic racism

Home » Press Releases » Citizen Action of Wisconsin: Everyone with love in their hearts must do more to interrupt systemic racism

Milwaukee: Citizen Action of Wisconsin Executive Director Robert Kraig released the following statement on the arrest of the white supremicist militia member who murdered two Black Lives Matter protesters and injured a third in Kenosha, and law enforcement’s apparent lax response to him before and after he shot his victims. See Citizen Action’s statement Monday here.

As a white and gay man, I am struggling like many of you to figure out what I can best do to support our African American friends and neighbors in this horrific moment. I did not make a new statement yesterday because I am trying, as many of you are, to gather my thoughts and listen to the people of color leaders within Citizen Action, my network, and in the media. In the eloquent statements and actions of so many Black Americans, from Marquette alum Doc Rivers, the professional sports strike begun by our own Milwaukee Bucks, Jacob Blake’s parents, scholars such as Princeton’s Eddie Glaude, and so many across the land, they are pleading for all of us to do more. If we are not Black Americans we can never fully understand the depths of their feelings, but we can listen with an open heart and act on their moral appeals.

I believe that each and every person with love in their hearts must look into their souls and decide what they can do to immediately interrupt and begin to unwind systemic racism. If we are being honest with ourselves, most of us, myself included, are not doing enough. Merely sympathizing or signalling that you are on the right side is inadequate. Merely voting for the better candidates is not enough. The scary thing is that despite the progress against overt Jim Crow racism since the 1960s, we seem to be reliving the same pattern of events which led to its reimposition by other means. The depressing pattern is all too familiar:

Taking real and appropriate action is hard in real time, it is only easy from the safety of history. It is too painless now to signal support for Black Americans today by identifying with liberation movements and their heroic leaders of the past. But the truth is that the bloody march over the Edmund Pettus Bridge or the 6th Street Viaduct, the Mason-Dixon line of Milwaukee in the 1960s, would not have been necessary if all people of conscience had stepped forward to make the hard and costly decisions required of them. Martin Luther King made an eloquent statement on this theme in his justly famous Letter from the Birmingham Jail.

The ugly truth is that the people just like us in the past did not act because there were costs. Elected leaders could lose votes, organizational leaders could risk their positions, corporate leaders fear a lose of customers or standing with their peers, and average people worry about offending friends, neighbors, and family members, or losing privileges. It is cost free to stand with MLK and John Lewis now, it is not so to really and truly stand with Blacks Lives Matter.

While empathy and individual efforts to increase racial consciousness are useful enterprises, a much deeper and more challenging level of commitment is called for by the leaders of modern Black liberation. In fact, far too many corporations and elected officials are embracing opposition to structural racism and giving symbolic support to Black Lives Matter and yet at the same time draining these terms of their actual content, as if saying the words or putting them on a sign or a website is enough. The same has been done to Martin Luther King, who fought and died for true economic equality, not merely the technical right to vote or a mythical “colorblind” society that has never existed. For the real MLK, people with vastly unequal economic means could never have the power to be truly free. One of the reasons white people are not slaughtered on suburban streets by their own police is both race and the economic power they have to fight back.

The most compelling African American thought leaders I have read on the subject, Michelle Alexander’s penetratingly eloquent The New Jim Crow and Ibram X. Kendi’s brilliant pair of books Stamped from the Beginning and How to Be an Antiracist, call for every moral person to use their power to disrupt and unwind structural racism. For Kendi, you can’t meet his definition of antiracist without both recognizing the deep racism in our society and in each of us, and taking effective action to replace racist structures. For him the defining mark of antracism is effective deeds, not words or personal reflection. A perfect example of this is the professional athletes who have gone beyond words to withdraw their labor until meaningful action is taken. They have used their power to disrupt the system and create a crisis of conscience. The same is called for from all those with substantial power such as our political leaders, corporate leaders, and at a lesser level of power nonprofit leaders such as myself and every person with love in their hearts for all humanity.

There are some immediate policy actions in our Monday statement, but consider these more of a rough draft than all that needs to be done to create a true antiracist America.

Chart Graph: Almost All Organized Violence is from Right-Wing Groups 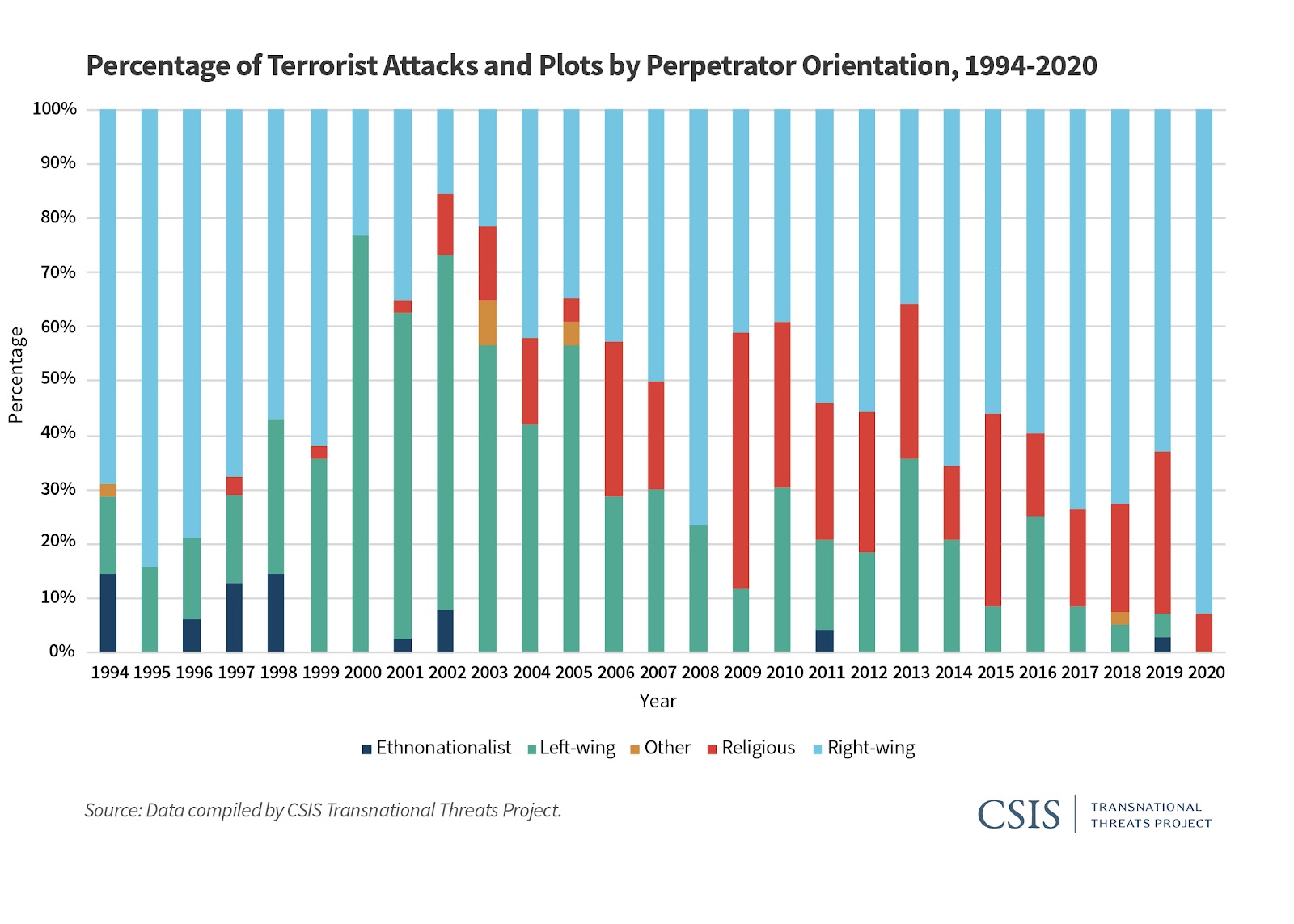