MILWAUKEE — With unemployment benefits set to expire the day after Christmas for millions, jobless workers returned to Sen. Ron Johnson’s office to hold a mock Christmas pageant. Dressed in costumes of classic Christmas characters The Grinch and Scrooge and with a larger-than-life paper mache Senator Johnson, unemployed workers detailed Sen. Johnson’s failure to support much-needed relief for workers who lost their jobs due to the pandemic, comparing his actions to the deeds of Christmas villains.

After judging the contestants in several categories, like “Smallest Heart” and “Most Miserly Act”, workers declared Senator Ron Johnson the “Worst Christmas Villain” and presented him with flowers and a crown. The action concluded with a plea from workers, voiced through Santa Claus, for Senator Johnson and Congress to earn a place on the “Nice List” by passing COVID relief without delay. 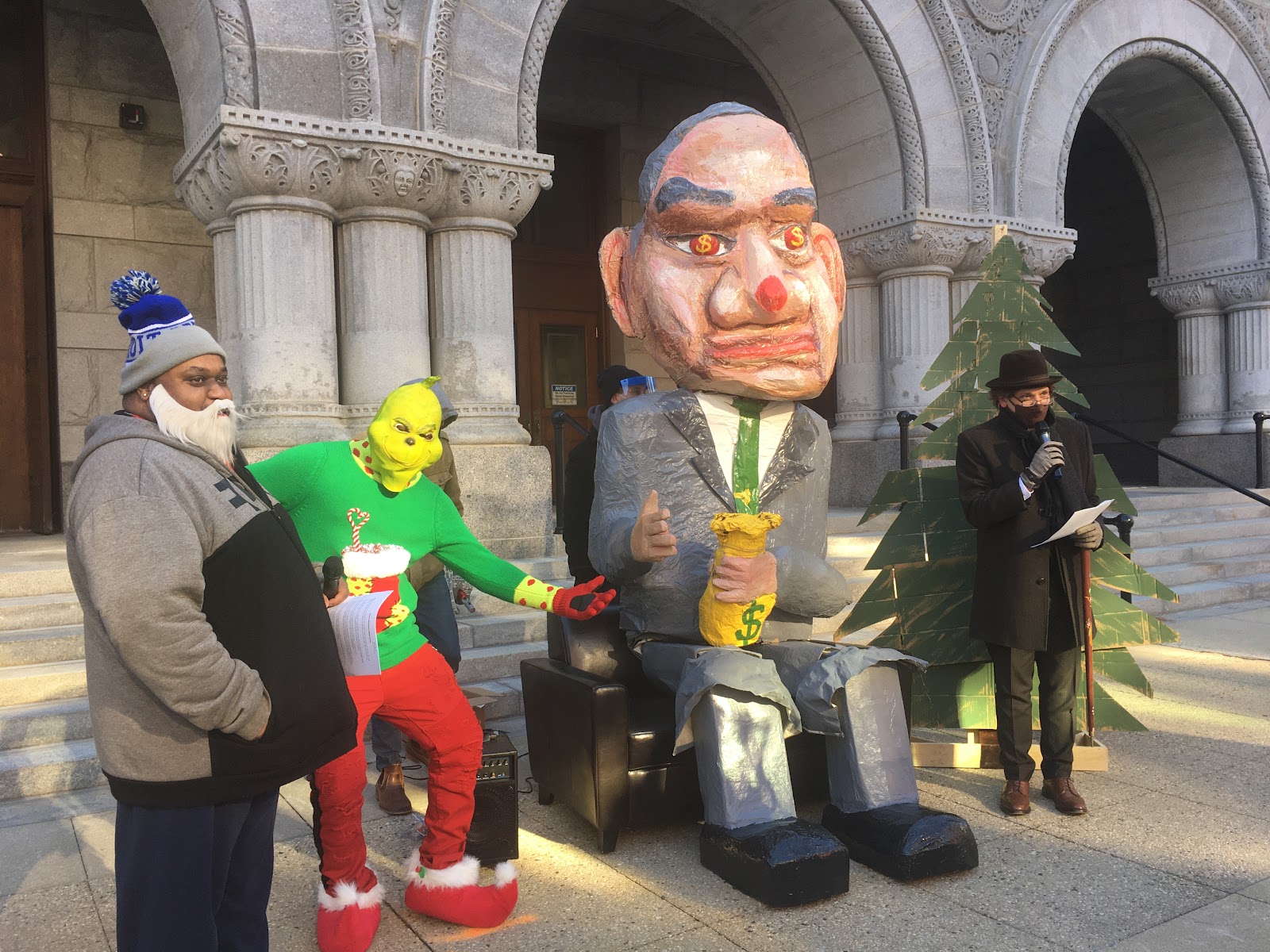 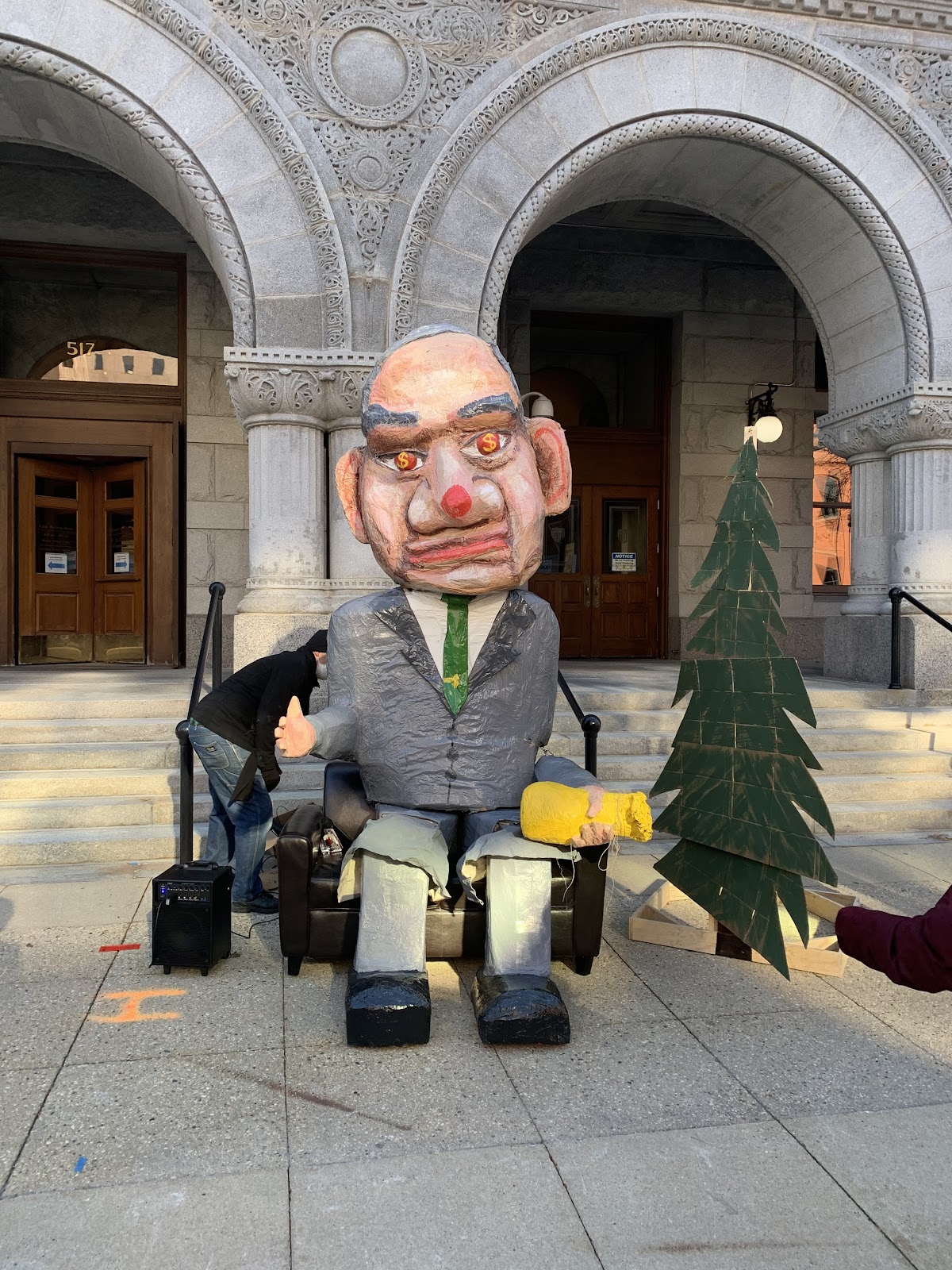 “This crisis will get a lot worse if Congress doesn’t act,” said Anthony Steward, unemployed cook at the Fiserv Forum and father of two. “This holiday season, families like mine don’t have much to celebrate. We’re trying hard to keep our heads above water, but we have a Senator who doesn’t seem to care about us. For months, we’ve been protesting and demanding that Senator Ron Johnson take action to pass economic relief, but he has failed to take action or even respond to our calls. We need economic relief. Senator Ron Johnson should stop acting the part of a Christmas villain and finally come through for working families.”

As more than 12 million Americans, including over 56,000 Wisconsinites face the cutoff of unemployment benefits on December 26th, workers who lost their jobs due to the pandemic are renewing their calls to restore urgently-needed unemployment benefits, and calling on Sen. Johnson to prioritize people over profits during the worst crisis in recent memory.

Monday’s action was the latest in a series of street theatre actions by unemployed people in Milwaukee, aiming to illuminate for Trump Republicans like Johnson the realities facing millions of working families without urgently-needed income support from federal and state government.

“Millions are still out of work, especially in the hard-hit service and hospitality industry,” said Troy Brewer, 50-year-old father of three and a MASH union member who lost his three restaurant jobs in March due to the pandemic. “People are waiting in food lines, essential workers are exhausted, and unemployment benefits are about to run out on the day after Christmas. Senator Ron Johnson needs to look out for working people, not the billionaires and big corporations, so we came out today to make sure our voices are heard. Whether we are working on the front lines or have lost our jobs due to the pandemic, Senator Johnson needs to do better by working class Wisconsinites.”

A movement of unemployed people in Milwaukee is rising up and demanding the institution of benefits and protections needed to survive the interlocking crises of COVID-19, economic inequality and systemic racism. Protesters are calling on federal and state lawmakers to do everything in their power to meet the demands of this moment and help protect all workers, including those who have lost a job.

Barnes campaign: Raises over $1.23 million in Q4 with average donation under $50