WASHINGTON, D.C. – October 7, 2020 – National Popular Vote and FairVote will provide an updated release each week through November 3 to track presidential campaign visits. The map is a visual indicator of who has influence in the presidential election and who does not. 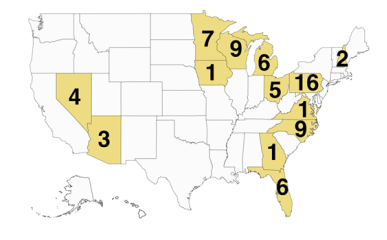 “The Trump and Biden campaigns are clearly homing in on battleground states over the first three weeks of the general election campaign,” said Dr. John Koza, Chairman of National Popular Vote. “To date, the presidential candidates have concentrated their 70 campaign events in just 12 states, relegating voters in 38 states and the District of Columbia to being mere spectators for the 2020 presidential election. The concentration of campaign visits parallels the concentration of advertising spending.”

“Campaign events by the candidates are an indication of a state’s relevance in presidential elections, and, by extension, the influence they will have with the next President, once he is elected,” continued Koza. “The recent extension of the offshore oil drilling ban for Florida and the allocation of coronavirus supplies to Florida illustrate the influence of closely divided battleground states on government policy. Meanwhile, wildfires are being ignored because the damage is being done to western states”

Recent stories point to battleground states receiving a higher share of Department of Transportation grants and a larger percentage of COVID-19 response request funding. Battleground states have historically been more likely to receive federal grants and exemptions from federal regulations (for example, regarding disaster declarations, No Child Left Behind, and Superfund programs).

“An American voter should not have to be from a battleground state to be relevant with the President of the United States,” said Koza. “Every voter in every state should be politically relevant in every presidential election; guaranteeing the presidency to the candidate who wins the national popular vote is the only way to get that done.”