MILWAUKEE, WI — During Judge Amy Coney Barrett’s three days before the Senate Judiciary Committee for her Supreme Court confirmation hearings, Senate Democrats exposed exactly why President Trump and Republicans are rushing to install her on the court — to accomplish what they couldn’t do through legislation and completely overturn the Affordable Care Act. One week after the election, the court will hear oral arguments in California v. Texas, the Trump-Republican lawsuit to dismantle the ACA. If successful, the lawsuit would throw our entire health care system into chaos by ripping away health care from more than 20 million Americans and ending protections for more than 135 million people with pre-existing conditions, all in the middle of an ever-worsening pandemic. Despite their claims to the contrary, Trump and Senate Republicans have no plan if the ACA and its critical protections are overturned.

Judge Coney Barrett dodged question after question from Democratic Judiciary Committee members about her history of hostile statements about the health care law. Senate Democrats continued to raise alarms about the consequences of dismantling the ACA during a pandemic, lifted up stories of Americans who depend on the law and explained to Americans that Trump and Republicans are rushing to confirm anti-ACA Judge Amy Coney Barrett in hopes she will help them accomplish their decade-long goal of eliminating the law. 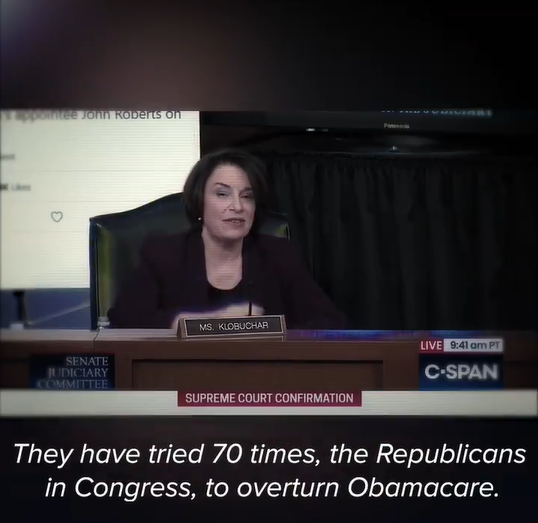