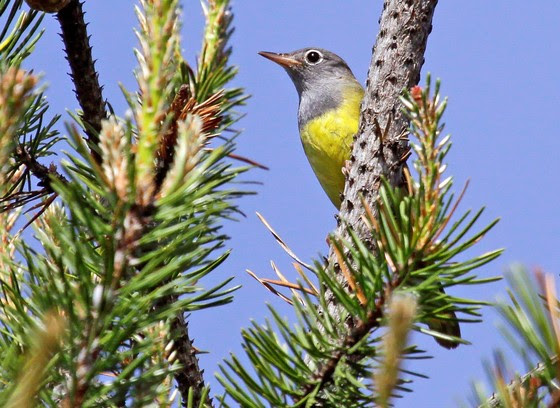 MADISON, Wis. – The Wisconsin Department of Natural Resources (DNR) today announced that it will work with partners to increase efforts to protect the at-risk Connecticut warbler in northwest Wisconsin.

The species emerged as one of Wisconsin’s largest declining bird populations during a comprehensive statewide Wisconsin Breeding Bird Atlas II survey conducted from 2015-19 to determine the distribution, breeding status, and trends of bird species that nest in Wisconsin.

The Connecticut warbler is a small gray-hooded bird with a bold white eye ring, yellow chest and belly and olive back. Younger birds and females have more muted colors than males. During summer nesting season, they live in jack pine and black spruce forests primarily in northern Wisconsin but occur in various forest types statewide, although uncommonly, during spring and fall migration.

Results of the Wisconsin Breeding Bird Atlas II survey spurred DNR biologists to conduct follow-up surveys at nearly 60 sites in summer 2021 to determine the warbler’s remaining population. They detected no warblers at those sites. The species is now known to breed in only one small area of upland jack pine in northwestern Wisconsin.

“Connecticut warblers and other migratory songbirds spend a great deal of time elsewhere in the country, many even spending winter on other continents like South America,” said DNR Conservation Biologist Ryan Brady. “Habitat loss, development, climate change and other threats throughout their annual life cycle make it harder for these birds to survive and reproduce.

The DNR is working with landowners, foresters and other resource managers to protect and enhance the warbler’s habitat of upland jack pine forests in eastern Douglas and western Bayfield counties, as well as discussing habitat management options in the surrounding landscape.

To address wintering ground conservation needs, the DNR and the Natural Resources Foundation of Wisconsin are working with international partners to develop conservation plans for critical migratory stopover sites and overwintering habitat in Central and South America. Money raised through the Foundation’s Great Wisconsin Birdathon supports that effort.

More About The Atlas Organizers, Participants And Results

The Wisconsin Breeding Bird Atlas II survey was jointly coordinated by the DNR, the Wisconsin Society for Ornithology, the Western Great Lakes Bird and Bat Observatory and the Wisconsin Bird Conservation Partnership. More than 2,000 volunteers scoured Wisconsin to document which bird species nest in the state, where nesting occurs and their numbers.

These efforts revealed Wisconsin has 243 species of birds nesting here, including 13 species not found nesting during the first atlas survey from 1995-2000. This information will inform bird conservation efforts for the next generation and is critically important as national studies show a loss of 3 billion breeding birds in the U.S. and Canada over the last 50 years.

Survey organizers are currently reviewing the data collected and are preparing and formatting it for a book release after 2022. Preliminary results are available to view here.