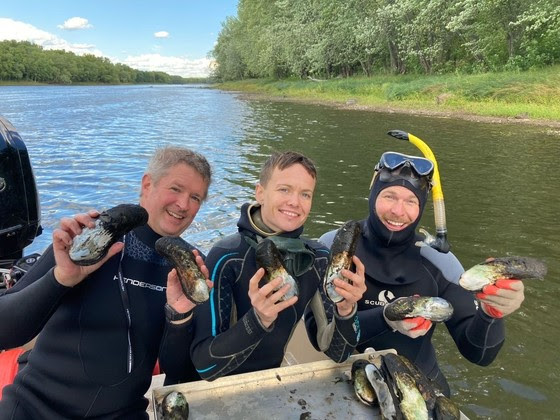 ST. CROIX FALLS, Wis. – The Wisconsin Department of Natural Resources (DNR) today announced that federal and state endangered native mussels first discovered above the St. Croix Falls dam in the St. Croix River in 1987 are still alive and estimated to be more than 100 years old.

In August 2021, biologists from the DNR, University of Minnesota and the National Park Service searched a stretch of river upstream of the St. Croix Falls Dam where spectaclecase mussels (Cumberlandia monodonta) had been previously discovered 34 years ago, and found a cluster of the native mussels.

Due to mussel shell erosion, biologists were not able to determine the mussels’ age on-site by counting their growth rings. Instead, biologists estimated the specimens at more than a century old based on when the river was dammed.

The live spectaclecase mussels were safely returned to their habitat. Dead spectaclecase shells were saved and will be cross-sectioned this winter to verify their age.

“Native mussels can live a long time, but these mussels were pushing the limits,” said Lisie Kitchel, DNR Conservation Biologist. “Finding some alive was amazing since the host fish species needed for their reproduction have been prevented from getting upstream as a result of the St. Croix Falls dam built in 1907.”

After female spectaclecase mature, they expel their larvae, known as “glochidia,” which must attach to the gills or fins of a specific fish to continue developing into a juvenile mussel before dropping off and growing into an adult mussel. Using fish as a host allows spectaclecase to move upstream and populate habitats it could not otherwise reach.

Recent research has identified mooneye and goldeye fish as host species for spectaclecase. These species are not present above the dam but are found downstream. That means reproduction can occur downstream, and surveys have found younger spectaclecase downstream.

Because of the mussels’ advanced age, biologists are taking action to preserve their genetic stock while they are still alive.

“Now we can implement strategies to propagate and augment the spectaclecase population there or reintroduce mooneye or goldeye above the dam to allow the spectaclecase to reproduce,” said Jesse Weinzinger, DNR Conservation Biologist.

Spectaclecase mussels can grow up to nine inches long and are named for the shape of their shells, which are elongated and sometimes curved. Historically, the spectaclecase was found in at least 44 streams of the Mississippi, Ohio and Missouri River basins in 14 states. It has vanished completely in three states and today is rarely found in only 20 streams, according to the U.S. Fish & Wildlife Service.

Their current distribution and status in the Mississippi River and St. Croix River were poorly known until the recent surveys by the DNR and other partners in 2019, 2020 and 2021.

Wisconsin has 50 native mussel species, with 24 endangered, threatened or in need of conservation. Native mussels are important to keeping Wisconsin rivers clean. They filter pesticides, mercury and other pollution from the water and keep it out of fish. They provide food for otters, raccoons, muskrats, ducks, fish and other wading birds. They also help indicate problems that may affect whole lake or river ecosystems.

The DNR teamed up with partners across Wisconsin to deliver and place more than 1,200 hatchery-raised mussels in several Wisconsin rivers where past water quality problems had taken a toll on mussel populations.

“Propagation and reintroduction are a useful conservation strategy to increase the abundance and distribution of native mussel populations,” said Weinzinger. “We’re thankful for the partnerships that made it possible to augment mussel populations in these streams and provide research going forward to help us shape recovery efforts.”

University of Wisconsin-Stevens Point students worked with the DNR conservation biologists to place over 700 mussels at two streams in Portage County to monitor the growth and survivorship of the animals. Results from this student-led project will help determine the feasibility for future reintroduction efforts.

In southern Wisconsin, DNR partnered with the Upper Sugar River Watershed Association to place an additional 500 fatmuckets into the Sugar River to augment existing populations.

To learn more about how the DNR and our partners work to conserve our native mussels, visit the DNR’s Wisconsin Mussel Monitoring Program webpage. Read the Clam Chronicle newsletter to see how the DNR works with volunteers to build projects, programs, and tools for citizen-based monitoring efforts.