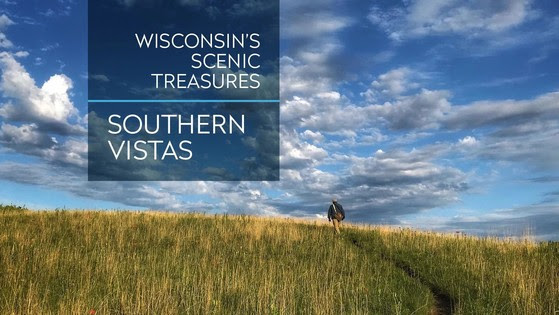 Filmed by PBS Wisconsin from the air, land and water, the documentary showcases state parks, natural areas, wildlife areas and forests, many of them held in trust and managed by the Wisconsin Department of Natural Resources (DNR).

Hundreds of hours of aerial panoramas and ground-level video create this memorable 60-minute adventure, highlighting the striking visual and ecological diversity of our state’s natural landscapes and rich scenic heritage. The program can be viewed online at pbswisconsin.org/scenictreasures.

Viewers will travel from limestone bluffs rising high above the Mississippi River to a rare hilltop prairie ablaze with wildflowers in Dane County, to the quartzite cliffs of Devil’s Lake State Park to a southeastern Wisconsin bog alive with carnivorous plants.

Along the way, viewers are treated to visual perspectives not often seen, from aerial vistas at the Dells of the Wisconsin River State Natural Area, to up-close scenes of colorful butterflies and flowers at the Pleasant Valley Conservancy State Natural Area.