Now through May 31, before the nursing and baby bat protection period begins, bats can be kept out of homes and buildings by following best practices.

The DNR’s Wisconsin Bat Program website offers do-it-yourself instructions and information on hiring a professional to remove bats humanely through a process called exclusion. Exclusion includes sealing a building except for primary exits, which are outfitted with one-way doors that let bats exit and prevent re-entry.

“While the goal of the DNR’s bat program is to protect bats and bat habitat, we understand that bats don’t need to share living spaces with humans,” said Heather Kaarakka, DNR conservation biologist. “Our online resources help people effectively and safely exclude bats or hire a wildlife control operator.”

Exclusions are prohibited June 1-Aug. 15 to protect Wisconsin’s little brown and big brown bats during their maternity seasons. Exclusions occurring during this period will separate mothers from their flightless pups, leaving the pups to die of starvation and potentially exacerbating the homeowners’ bat problem. 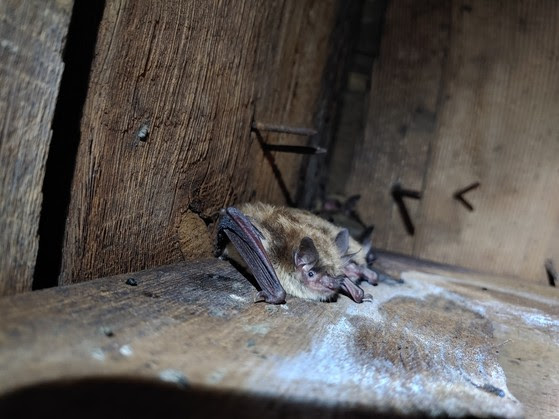 “Frantic mothers searching for an opening to reach their pups may enter your living space and be more difficult to deal with than what you started with,” Kaarakka said. “By trapping the flightless young inside, you also may have created another unexpected problem — the smell of dead animals.”

Effective exclusion efforts should target time periods in the spring and fall where temperatures are consistently above 50°F as bats are generally active at temperatures above that level.

Little brown bats and big brown bats, along with northern long-eared bats and eastern pipistrelles (also known as tricolored bats), are all threatened species in Wisconsin and receive legal protection, including the ban on exclusions during maternity seasons. These four bat species, which hibernate in caves and mines in the winter, have been decimated by deadly white-nose syndrome.

Although bat roosts are protected during the maternity period (June 1-Aug 15), exclusions may be completed if the landowner feels the bats pose a health or safety risk to humans. Exclusions may be completed in the summer by submitting a health exemption form. Exclusions are allowed during the maternity season in hospitals, medical clinics, daycare centers, nursing homes, assisted living facilities and restaurants without a health exemption form.

Build A Bat House To Provide An Alternate Roost

Bats can reduce pesky mosquitoes and night-flying insects around your home and garden. Help keep these valuable mammals in your area by building a house for roosting and to raise their young.

Late winter/early spring is a good time to provide an alternative roost – a bat house – in the general vicinity of where bats enter the building. Find a supply list, instructions, and how-to videos on the DNR’s website.

“As bats come and go, they’ll become familiar with the structure and are more likely to take up residence there after they’ve been excluded from a building,” said DNR ecologist J. Paul White. “By installing a bat house before you exclude bats, you increase the odds of maintaining the beneficial insect‐eating service the bats provide in your backyard.”

A single bat can eat up to 1,000 mosquito-sized insects an hour and the equivalent of its bodyweight every night. University of Wisconsin-Madison research analyzing bat guano (manure) collected at sites across Wisconsin confirms that bats consumed 17 distinct types of mosquitoes, including nine species known to carry West Nile virus. Learn more about the science behind bats and other bat news in the DNR’s 2021 Echolocator newsletter.