April is Medicaid Awareness Month, and the Republican lawmakers in the states that have not yet expanded Medicaid now have even more reason to do so. In addition to providing affordable coverage options for millions of uninsured Americans through the Affordable Care Act, the American Rescue Plan provides robust financial incentives for the 14 states that have not implemented Medicaid expansion. The new offer is too good for holdout states to turn down: In addition to covering 90 percent of the costs for the expansion population, the federal government will chip in an extra 5 percent for the traditional Medicaid population for two years. This translates to billions in additional dollars for the states.

Despite the overwhelming benefits of Medicaid expansion, Republicans have spent years undermining the ACA and its expansion of Medicaid at every turn, blocking millions from coverage. Yet the program has become increasingly popular among conservative voters. In 2020, the country saw voters in two deeply conservative states, Oklahoma and Missouri, approve expansion. 75 percent of Americans have a favorable view toward the Medicaid program, and 61 percent of Americans in non-expansion states favor expansion.

Research confirms that Medicaid expansion increases access to care, improves financial security, and leads to better health outcomes. Medicaid expansion has played a vital role in reducing racial disparities in health care access and has served as a critical safety net during the pandemic. An estimated four million uninsured adults — including 640,000 frontline workers, 500,000 people with disabilities, and 926,000 older adults aged 50 to 64 — could gain coverage if the remaining holdout states adopted expansion. Importantly, people of color make up nearly 60 percent of this group. In total, more than 6 million people could enroll in Medicaid if the remaining states implemented expansion. 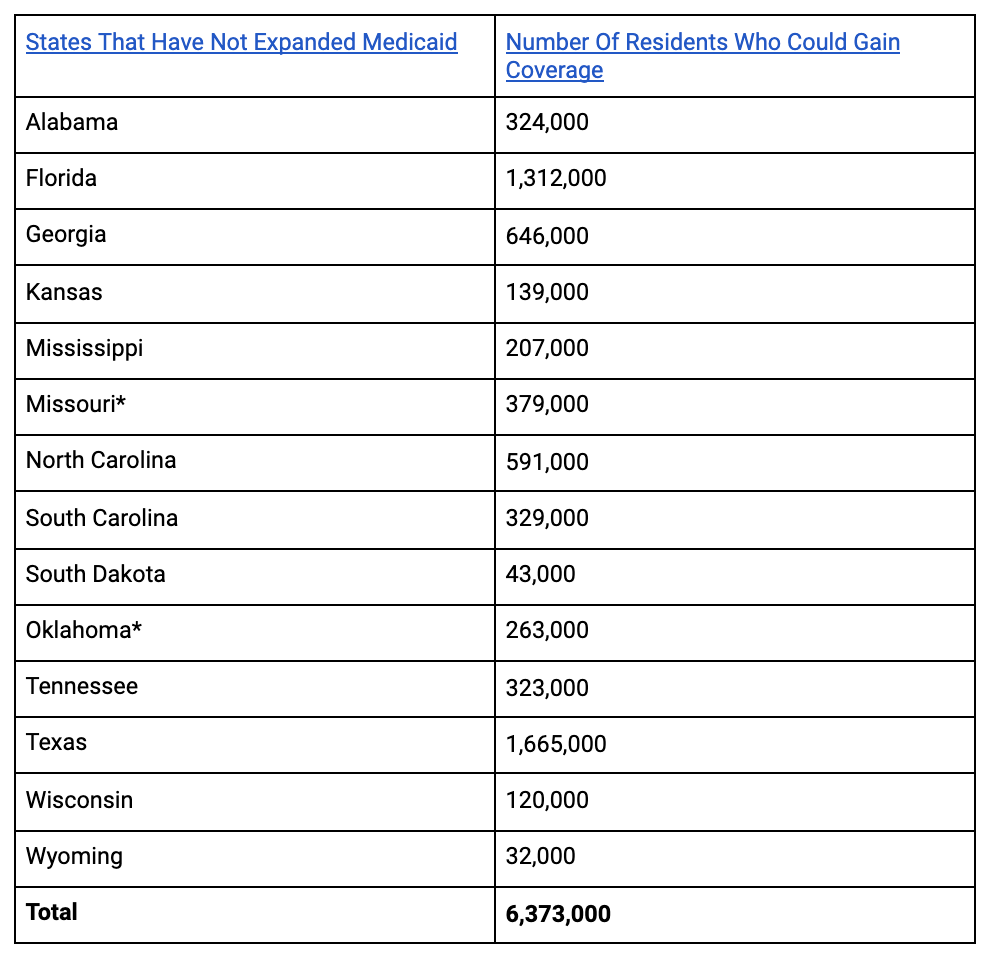 Medicaid Expansion Saves Lives. *Voters in Missouri and Oklahoma have approved expansion in 2020, but these states have not yet implemented the program. Both states are eligible for enhanced funding under the American Rescue Plan.

Medicaid Expansion Is A Lifeline For Rural Hospitals.