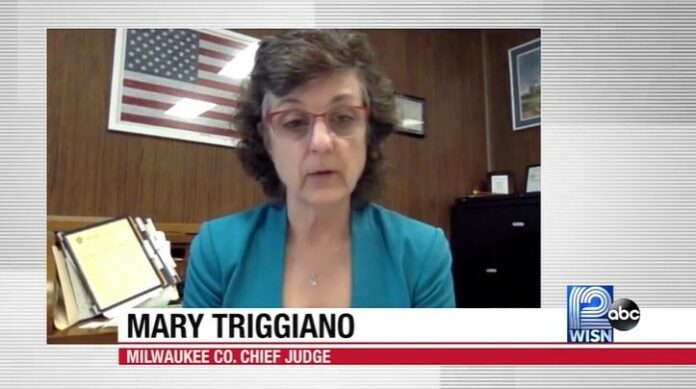 Milwaukee County Chief Judge Mary Triggiano says additional courts will be phased in by June to address a backlog of criminal cases after Gov. Tony Evers allocated more than $14 million in federal pandemic relief funds to address the crisis.

“We knew the backlog, any kind of backlog, is untenable and has consequences,” Triggiano said on WISN’s “UpFront,”‘ which is produced in partnership with WisPolitics.com.

Triggiano said as of Friday, the county had roughly 1,665 felony cases backlogged and 2,400 misdemeanor cases.

The county and state are currently working on a memorandum of understanding on how the federal funds will be spent and are internally analyzing which cases are the most severely backlogged to target with the additional funds.

“We believe with this allocation of ARPA money, and the creation of additional courts to deal with our felony and misdemeanor cases, we should be able to clear the backlog within 18 months,” Triggiano said.

Wisconsin Public Defender Kelli Thompson recently told “UpFront” because of a shortage of public defenders, it will take several years to clear some 35,000 cases statewide.

“We’re working to problem solve on a daily basis like we did in 2020,” Triggiano said. “We have not stopped.”

Coming off his first full weekend campaigning, Republican Tim Michels is looking for his lane among Republican primary voters in his bid for governor.

“The open question is will Michels’ entry take votes away from someone or will it pick up some of those undecided voters?” said Charles Franklin, director of the Marquette Law School poll.

Franklin’s latest poll was in the field just before Michels entered the race, so respondents were not asked about him.

In the poll released this past week, Rebecca Kleefisch received the support of 32 percent of Republican primary voters, Kevin Nicholson 10 percent and Tim Ramthun 4% percent.

“One virtue is we now have a good benchmark of where the race stood at the moment he entered, so when we do our next poll we’ll have a good chance to see what impact he’s having,” Franklin said.

The winner of the August primary will face Democratic Gov. Tony Evers in November.

“I think Gov. Evers is in fairly good shape in terms of his job approval,” Franklin said. “The question is does that hold up when whoever the eventual nominee launches the inevitable campaign and campaign attacks and what does Evers have in reply?”

“We hope we receive anyone,” Kasongo Kalumbula said, the school’s principal. “We welcome anyone from Ukraine, from Afghanistan, from anywhere in the world.”

The school said it currently has students from 18 different counties representing up to seven different languages, including refugees from Afghanistan and other countries.

“I’ve had students that are brand new to the country just by a couple months and then they’re coming to school,” one teacher said. “Some don’t know very much English at all, and so there’s different challenges in how do you present material and make it so they can access the things that they’re learning.”

See more from the show here.