Press Releases Common Cause Wisconsin: Releases statement on what citizens can do regarding voting... 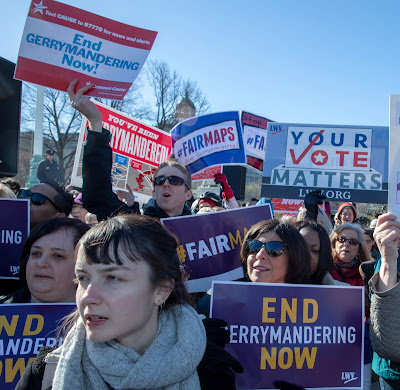 Late last year in November, majority Republicans rammed through the Wisconsin Legislature hyper partisan state legislative and congressional district voting maps in a redistricting process that was even more partisan and unfair than in 2011, when Wisconsin was the victim of the most partisan gerrymander in the nation.

Then, on November 30th, the narrow, conservative 4 to 3 majority on the Wisconsin Supreme Court issued a deeply flawed and completely misguided decision regarding the criteria it says it will utilize to determine what Wisconsin’s state legislative and congressional district maps will look like for the next ten years. The 2021-22 redistricting process went to the state supreme court after Gov. Tony Evers, on November 18th, vetoed the hyper partisan, extremely gerrymandered voting maps that were rammed through the Republican-controlled Wisconsin Legislature without a single Democratic vote earlier in November.

The G.O.P. maps, drawn in secret with almost no public input and without a single person (other than Assembly Speaker Robin Vos and State Senate Majority Leader Devin LeMahieu) speaking or registering in support of them at the October 28th public hearing, are an updated version of the maps passed by Republicans in 2011 when, as mentioned before, they perpetrated the most extreme and partisan gerrymander in the nation that year.

The conservative majority Wisconsin Supreme Court “opinion” of November 30th was deeply flawed and illogically reasoned — the work of ultra-right wing Justice Rebecca Bradley, whose completely fabricated concept of “least change” as the basis for adjudicating state legislative and congressional voting maps has no legitimate basis in either law or logic. Dissenting progressive Justice Rebecca Dallet pointed out that “no court in Wisconsin, state or federal, has ever adopted a least-change approach.” She went on to say, “The least-change principle is found nowhere in the Wisconsin or U.S. Constitutions.” In other words, Rebecca Bradley concocted a brand-new concept, based in fiction, purely to support extreme Republican- gerrymandered voting maps.

Bradley also completely misinterpreted a U.S. Supreme Court majority decision more than three years ago in Rucho v. Common Cause in which Chief Justice John Roberts basically “punted” partisan gerrymandering to the states because he didn’t want federal courts playing such a major role in redistricting cases. But Bradley opined that the Wisconsin Supreme Court shouldn’t consider extreme partisanship in adjudicating state legislative and congressional voting maps because partisanship was a legislative matter, not one that courts ought to consider. That directly contradicts what Roberts and the conservative majority on the U.S. Supreme Court ruled — that it is precisely the province of state courts, like the Wisconsin Supreme Court, to judge, whether, a redistricting process is too partisan, unfair and/or unjust. Rebecca Bradley and the three other conservatives on the Wisconsin high court badly but deliberately botched this decision.

The Wisconsin Supreme Court will consider redistricting proposals and hear oral arguments tomorrow, Wednesday 1/19, before issuing a final determination — perhaps by the end of this month — of how the state legislative and congressional voting maps will look for the 2022 election and beyond. Whether or not and to what extent federal courts may intervene in this matter isn’t clear right now. But we shouldn’t expect that a federal court will contradict the misguided Wisconsin Supreme Court’s apparent intention to extend extreme partisan gerrymandering in Wisconsin for another decade.

If you would like to view these oral arguments, they will commence at 9:00 AM tomorrow on Wisconsin Eye. Use this link (Schedule – WisconsinEye) and scroll down to Wednesday, January 19 – Wisconsin Supreme Court Oral Arguments and click the “Live” link at the end.

What can be done to counter the disgust and dismay that most Wisconsinites feel right now about what the gerrymandered Republican majority in the Wisconsin Legislature and now, the conservative activists on the Wisconsin Supreme Court have done to defy the will of the people and extend and cement into place their rigged voting maps for another ten years? The answer is clear and simple. We must redouble our effort and determination to change the current corrupt status quo.

Obviously, the current redistricting process in Wisconsin is completely in need of reform, as we have been advocating for years now. The antidote to this poisonous gerrymandering has long resided in our neighbor to the west, Iowa, which adopted a fair, non-partisan redistricting process way back in 1980. And, it was put into place by a Republican Governor and a Republican-controlled Legislature there.

Legislation, with bipartisan support, to establish a similar process in Wisconsin, has been introduced in the last seven legislative sessions and has not received so much as a public hearing since 2009! Here is what you can do: contact both your State Senator and your State Representative and demand that they support the bipartisan redistricting reform legislation introduced in the Wisconsin Legislature in June based on our neighboring state of Iowa’s non-partisan redistricting process. Senate Bill 389 and Assembly Bill 395 is the “Iowa Model” legislation whose lead sponsors are State Sen. Jeff Smith and State Rep. Deb Andraca, who discussed the measures in the August 17th CC/WI webinar.

It is simple and very easy to use the tool Common Cause developed to write to both your State Senator and your State Representative and demand a public hearing and then a vote on SB 389 and AB 395 in the weeks ahead, before the 2022 election season kicks into high gear. Take less than a minute and do it now, even if you have before, because repeating your demand for reform is effective and necessary. You will feel better for doing so! 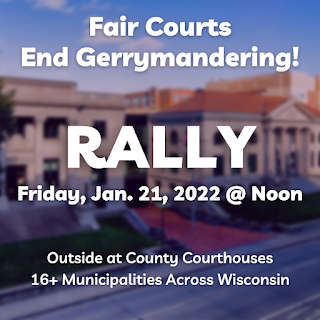 Our partners with the Fair Maps Coalition are organizing “in-person” rallies in front of county court houses throughout Wisconsin to be held simultaneously beginning at 12 Noon this coming Friday, January 21st to demonstrate public support for fair and impartial consideration of redistricting and fair voting maps before the Wisconsin Supreme Court. While CC/WI is not directly involved in these rallies, we wanted to make the information available to those of you who feel comfortable gathering safely (with masks and socially distanced) outside at various locales throughout the state to participate. For more information and/or to sign up for one of these rallies, go here.

A final decision by the Wisconsin Supreme Court on redistricting for 2022 is not the end of this process or this fight for fair voting maps. We will never cease to insist on a non-partisan redistricting system for Wisconsin until that objective has been fully realized. The struggle for fairness and justice almost always takes years and often decades before it is achieved. We are much further along the road toward our goal of ending partisan gerrymandering than we were just ten years ago. Rather than despairing or losing hope, instead take action! There is no “magic bullet” that is going to fix this. Just determination, hard work and perseverance. We’re in it for the long haul and hope you will be too.

Dept. of Agriculture, Trade and Consumer Protection: Taylor Schaefer selected as the 75th Alice in Dairyland