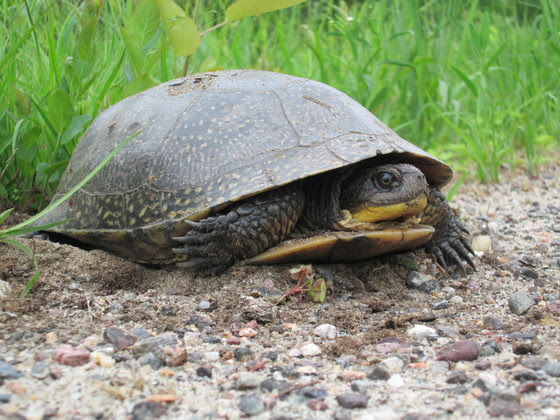 MADISON, Wis. – The Wisconsin Department of Natural Resources (DNR) is asking the public to give turtle mothers and the next generation of turtles a helping hand by following a few easy actions on World Turtle Day, May 23, and the throughout turtle nesting season.

This time of year, turtles are beginning to emerge from rivers, lakes and wetlands to lay eggs. Wisconsin’s 11 turtle species lay eggs in nests from late May through June in sunny and well-draining uplands, where they are highly visible along roads and in residential yards. Many females are run over by vehicles during these annual nesting migrations, a leading cause of turtle decline throughout Wisconsin. Turtle nests also experience high levels of predation as populations of nest-raiding animals such as raccoons, skunks and coyotes have grown beyond historical levels.

“The nesting season is a really tough time to be a turtle mother. Many are removed from the population by car collisions on roads, while some protected species are illegally taken from the wild and sold in the illegal pet trade,” said Andrew Badje, DNR Conservation Biologist. “Protecting adult females and turtle nests in the wild are the best ways to conserve turtle populations in Wisconsin.”

Wisconsin’s protected turtle species face additional challenges. Wood turtles and Blanding’s turtles cannot reproduce until they reach 12 to 20 years, and ornate box turtles tend to produce few eggs each year. Therefore, the removal or death of even one female turtle per year can lead to population declines or the elimination of local populations.

The DNR encourages people to consider following these protective actions from now until the end of July:

Learn more about turtles in Wisconsin on the DNR’s Turtle Conservation Program webpage.