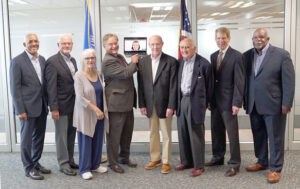 MADISON— Wisconsin Department of Revenue (DOR) Secretary Peter Barca yesterday welcomed eight former Secretaries of Revenue, representing seven different administrations, to the department’s headquarters in Madison. The summit of former DOR Secretaries was held as part of a broader series of internal department events to commemorate the 55th anniversary of the formation of the department’s Income, Sales and Excise Tax Division as well as the 50th anniversary of the formation of its Audit and Compliance Bureaus.

They discussed the past, present, and future of the department and shared their experiences and challenges, touching on key accomplishments during their respective tenures. These included the addition of personal computers for staff, the launch of the department’s website, the implementation of electronic filing, the addition of the Wisconsin Lottery to the department, combined reporting, and the creation of the Division of Research and Analysis, now known as the Research and Policy Division.

Much of the conversation revolved around the increasing importance of technology and its role in increasing efficiency and providing better customer service over the past 50 years.  All secretaries commended the staff who worked with them for their professionalism and desire to serve the residents of Wisconsin.

When asked for their thoughts on the future of the department, they agreed it looks bright, stressing the need to remain focused on utilizing technology and data to better protect and serve customers. They also noted that continuing the tradition of investing in staff development and training is critical to continued success.