Washington, D.C. – We have been saying it for over a year: the Democrats have a crisis on their hands leading up to the midterms. But don’t take it from us.

Democrats are lost when it comes to connecting with real Hispanics and real Americans: 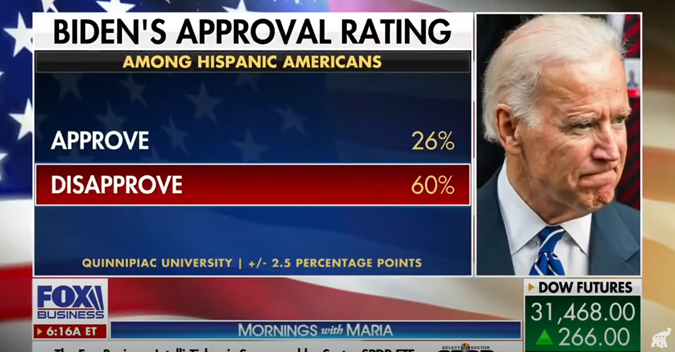 Here is what Axios is saying:

Why it matters: Democrats’ hopes for retaining power rest on nonwhite voters remaining a reliable part of the party’s coalition. Their theory of the case collapses if Republicans make even incremental gains with those voters.

What the data show: Democrats are statistically tied with Republicans among Hispanics on the generic congressional ballot, according to a New York Times-Siena College poll out this week. Dems held a 47-point edge with Hispanics during the 2018 midterms.

What’s happening: Democratic strategists say the party’s biggest vulnerability is assuming that the priorities of progressive activists are the same as those of working-class voters.

Between the lines: Add the reality of growing inflation and worries of recession, and you see why Democrats are losing ground with a core part of their coalition.

Reality check: Suburban districts still make up the majority of congressional battlegrounds, and the GOP’s Trumpified brand remains a threat to limit their gains.

The bottom line: The GOP is trading soccer moms for Walmart dads.

If Hispanics increasingly disapprove of President Biden and the Democrats, then why do Democrat Senators like Mark Kelly, Raphael Warnock, Catherine Cortez Masto, Maggie Hassan, and Michael Bennet fully support their failing agenda?