MILWAUKEE, Wis.—This week Chef Gregory León, a James Beard award finalist and owner of Amalinda in Milwaukee, took Senator Ron Johnson to task for blocking funding for the state’s restaurant industry and spending taxpayer money on traveling to Florida instead. On Monday, Opportunity Wisconsin launched “Ron Johnson’s Fort Myers Vacation Guide,” a satirical travel blog “authored” by Senator Johnson where he writes, “If you’re a self-proclaimed cheapskate like me and looking to save a few bucks on your next vacation, I’ve taken the liberty of drafting this guide. Here are my do’s and don’ts to ensure that your next vacation to my favorite spot, Fort Myers, is a breeze.” 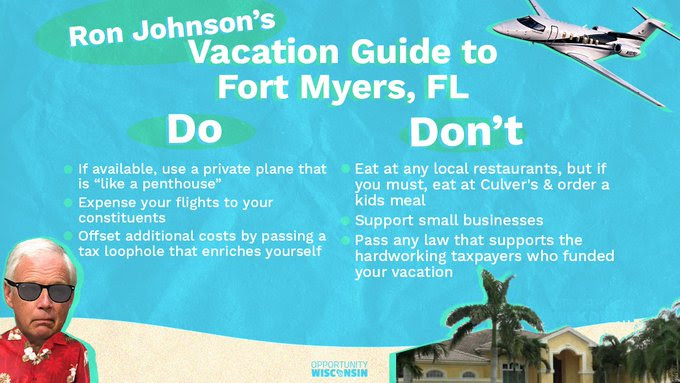 Last month the Milwaukee Journal Sentinel published a devastating report detailing how Senator Johnson has been using taxpayer dollars to fly between his vacation home in Florida and Washington, D.C. Federal records show that taxpayers footed the bill for 19 flights from Fort Myers, Florida — where Johnson purchased a home for $1.6 million in 2013 — to Washington between 2013 and May 2021.

As a restaurant owner in Milwaukee, we rely on the boost in tourism we see in the summer to keep us in the black, pay our employees, and grow our business. Because of the pandemic, we’ve seen a dramatic drop in tourism to our state, making an already difficult situation for restaurants even more financially precarious. But we’ve gotten through these tough times, thanks to our employees, our families, and our fellow Wisconsities. We banded together, helped each other, and now we’re climbing out of the pandemic.

But while most of us were trying to support our friends and neighbors by spending our dollars in our communities, our state’s senior Senator, Ron Johnson, decided to spend his vacation dollars in Florida. Even worse, he asked us to help foot the bill. That’s right. The Milwaukee Journal Sentinel recently reported that Senator Johnson was charging Wisconsin taxpayers for trips from his vacation home in Florida back to Washington, D.C..

Pure and simple, this stinks. It certainly seems to be in violation of the law. But I’ll let others litigate that. What bothers me the most about this is that it’s apparently too much to ask our Senator to support the Wisconsin small businesses he is supposed to represent?

But this isn’t the first time Senator Johnson has put himself before us. He does it every day. He consistently voted against things that help Wisconsin families, like expanding the Child Tax Credit and Earned Income Tax Credit, while voting to give rich people like himself more tax cuts that they don’t need.

Just last month, he blocked critical funding for our state’s restaurant industry, an industry that supports 288,000 jobs and nearly 13,000 small businesses in Wisconsin. Of course, considering he recently said he’s “not that fond of restaurants,” we probably shouldn’t have been surprised, since Senator Johnson only seems to vote for things that personally benefit himself.

Unfortunately, his self-servingness doesn’t stop there. Senator Johnson is very wealthy. In fact, he’s one of the richest members of Congress. Yet in 2017 he had the audacity to give himself a tax cut while he consistently voted to raise taxes on Wisconsin small business owners and families. Even worse, he went on the radio recently and complained that his wealth had “only doubled” since joining the Senate.

I don’t begrudge Senator Johnson for being wealthy. But I do resent that while he’s voting to make life harder for Wisconsin families who are struggling to put food on the table and keep a roof over our heads, he’s using his elected office to make himself even richer. And now, as a final insult, he’s asking Wisconsin families to help pay for his vacation travel from Florida. What’s wrong with vacationing in Wisconsin, Senator? And what’s wrong with paying for it yourself? You can clearly afford it.

Enough is enough. If Senator Johnson wants to spend his time in Florida rather than Wisconsin, fine. He can stay in Florida as far as I’m concerned. But don’t kick us when we’re already down by making us pay for it. Just as importantly, stop voting to make our lives harder just to give yourself more tax breaks you clearly don’t need.

Since early 2021, Opportunity Wisconsin has been working  to hold Senator Johnson accountable to his constituents and to demand he vote for policies that support Wisconsin residents. In addition to holding conversations with Wisconsin workers and families across the Badger State, Opportunity Wisconsin has spent over $5 million in TV ads urging Senator Johnson to focus his work in Washington on addressing the economic needs of his constituents and to stop putting his personal profits over the people of Wisconsin.