MADISON, WI— Main Street Alliance of Wisconsin and our 170+ small business members are proud to partner with the Wisconsin Budget Project in rejecting attempts to repeal the state income tax and increasing the sales tax, as proposed by some conservative business lobbying organizations.

Please check out this analysis, conducted with the Institute for Taxation and Economic Policy on why repealing the state income tax, and increasing the sales tax, would favor the wealthy and hurt small business.

You can read the full analysis here.

A group of conservative business lobbyists have proposed a radical change that would raise taxes on people with the lowest incomes to cover part of the cost of giving huge tax cuts to the wealthy and powerful. The plan would result in the largest tax cuts going to white households, with households of color receiving smaller tax cuts or having to pay more in taxes. The enormous cost of the proposal would make it difficult for the state to provide even basic public services that schools, businesses, and families need to thrive.

An extremely large tax cut for the wealthy and powerful

Filers with low incomes would actually pay more in taxes under this plan than before the change. A filer in the bottom 20% by income, a group with an average income of $15,000, would expect to pay $460 more a year in taxes on average. Filers in the second 20% by income would also have their taxes hiked, paying $250 more on average. Taxes could also increase for middle-income Wisconsinites if the large reduction in total tax revenue results in cuts to state property tax relief or keeps that relief from growing in proportion to property taxes.

This pattern of big tax cuts for people with the highest incomes, and tax increases or much smaller tax cuts for people with lower incomes also holds true if the tax change is measured as a share of income, instead of in dollar amounts. The lowest-income households would pay an additional 3.0% of their income in taxes from this change, on average. In contrast, the top 1% would receive the biggest tax cut measured as a share of income, at -4.7%. 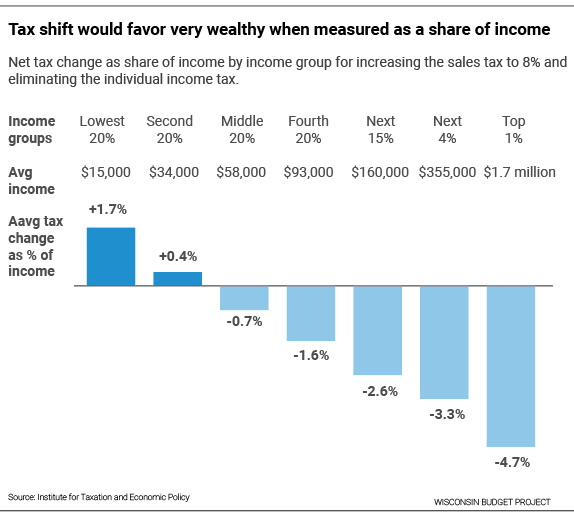 Even without the regressive change that has been proposed, Wisconsin’s tax system already requires people with low incomes to pay a higher share of their incomes in state and local taxes than people with much higher earnings. 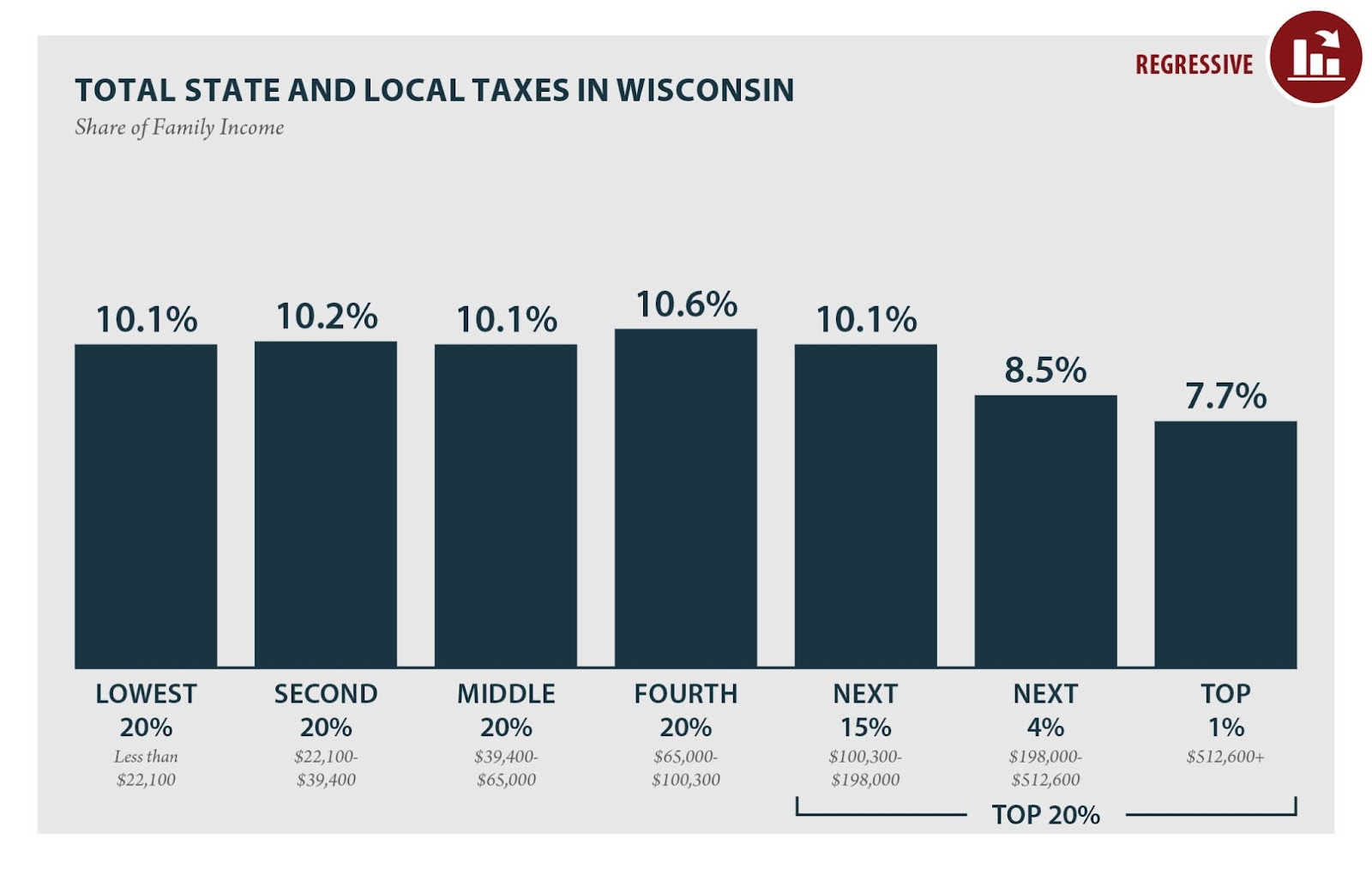 Wisconsin’s tax code is a major driver of economic and racial inequality, and contributes to the increasing concentration of income and wealth in a few hands—hands that are most likely to be White, due to a long history of racial discrimination. By targeting the bulk of a mammoth tax cut to white households, this proposal would make it harder for families of color to thrive.

The tax change would favor White filers over people of other races and ethnicities. White filers would get a tax cut ($2,394) more than three times as large in dollar amounts as Black filers ($741), on average. Latinx filers would have a tax increase of $282 on average. 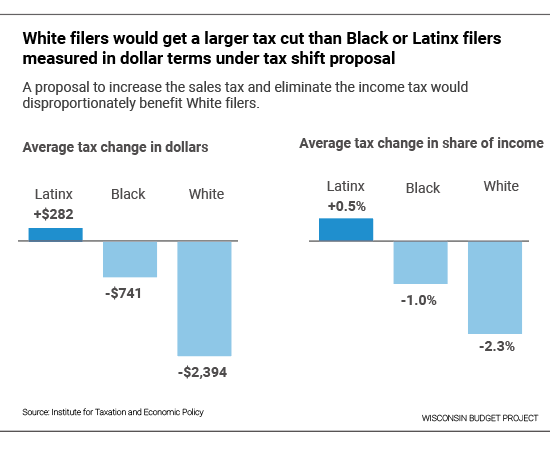 This change would result in a massive revenue loss that would make it much more difficult for Wisconsin to make investments in families, schools, communities, and public infrastructure. The state would lose an estimated $5.3 billion in tax revenue a year, forcing the harmful elimination of entire categories of services that make Wisconsin an attractive place to live, work, and do business. To put the tax cut in perspective, it would require budget cuts equivalent to ending the state support for BadgerCare, the program that provides health care for people with low incomes; closing every prison in the state; and ending state support for Wisconsin’s technical college system, all combined.

Increasing the sales tax to make up for a cut in income taxes moves the responsibility for paying taxes away from the rich and powerful, and onto the backs of people with low and moderate incomes. It would funnel larger tax cuts into the pockets of white filers while shorting households of color or even requiring them to pay more. This tax shift is paired with an enormous tax cut, one that would strip billions from kids’ classrooms, our health care system  and public infrastructure — the very things that Wisconsin small businesses and families need to succeed. We can’t create broad-based prosperity for Wisconsin by raising taxes on the families who can least afford it, just to pay for tax cuts for the rich, while making it impossible for Wisconsin to afford to support its families and communities.

The Institute for Taxation and Economic Policy provided the analysis of distribution changes. This analysis assumes Wisconsin’s Earned Income Tax Credit and the Homestead Credit, two refundable income tax credits, would be eliminated along with the state’s individual income tax. Of the nine states that lack an income tax, none currently have an Earned Income Tax Credit, although one state has an EITC planned for the future. Only one state of the nine has a property tax circuit breaker credit similar to Wisconsin’s Homestead Credit, albeit with much more limited eligibility. If the refundable credits were included in the analysis, the amounts of the tax changes for low and moderate income groups would change slightly but the results would still be strongly skewed towards filers in the top 1%.

Why Do These Organizations Support Repealing the State Income Tax?

For years, organizations like the ones listed above have committed ‘political identity theft’ by pretending to represent small business when in fact they are representing the interests of the very wealthy and large Corporations. Small Business owners in Wisconsin have taken notice and are sick of being used as political props to support the failed ideology of trickle down economics.

It would be refreshing if these groups were honest about the fact that they believe that the tax code should favor the wealthy and large corporations at the expense of working families and small business. We won’t be holding our breath.