Opinion Bill Kaplan: Baldwin fights against inflation and for jobs

The latest U.S. and Wisconsin jobs reports have been impressive. The U.S. gained 467,000 jobs in January and nearly 7 million jobs over the last 12 months. The U.S. unemployment rate is a low 4 percent, while Wisconsin’s rate is 2.8 percent. President Biden said: “We have seen historic success … with the greatest year of job growth in history, Americans finding better jobs, better wages, and better benefits, along with the fastest economic growth in decades.”

However, the 7.5 percent annual inflation rate is a serious problem. Biden knows this: “On higher prices, we have been using every tool at our disposal, … (although) Americans’ budgets are being stretched in ways that create real stress at the kitchen table, there are also signs that we will make it through this challenge.” One critical way to fight inflation and increase jobs is more production of computer chips in America. Chip shortages have led to price increases for appliances, cars, electronic devices and much more.

Congress is on the case. Both the Senate and House have passed legislation to respond to China’s economic challenges, boost scientific research in emerging technologies and invest billions to increase the U.S. manufacture of chips. Wisconsin Democratic Senator Tammy Baldwin played an important role in passing the bipartisan Senate bill. And, Baldwin successfully fought for including buy American provisions. Wisconsin manufacturing companies applauded Baldwin. However, Wisconsin GOP Senator Ron Johnson, clueless, broke with 18 GOP senators supporting the bill to block passage, and then voted no.

As inflation worsened business groups saw passage as necessary to support U.S. manufacturing and drive down prices. The National Association of Manufacturers said: “The introduction of the America Competes Act (House bill) … is a major step forward, and lawmakers can feel confident that supporting this bill means supporting the future of manufacturing in America. Not only would its provisions help address inflation and alleviate supply chain challenges we’re facing today, but the bill provides significant investment in U.S. semiconductor manufacturing, which would also help us to avert future crises.” But Wisconsin Manufacturers & Commerce, still fighting stale ideological battles, was silent.

Fortunately, the House passed the America Competes Act. Unlike the Senate bill it lacked GOP support in the more polarized House. The Wisconsin delegation split along party lines. All state Democratic representatives voted yes and all state GOP representatives opposed. The different bills will now be reconciled for final congressional passage. Biden said: “The House took a critical vote today for stronger supply chains and lower prices, for more manufacturing – and good manufacturing jobs – right here in America, and for outcompeting China … .”

Meanwhile, Baldwin continues her efforts “to help American producers export their products to the international market” with sponsorship of bipartisan legislation. And, she fights to keep industrial jobs such as making new U.S. Postal Service vehicles in Wisconsin. In contrast, Johnson didn’t stand-up for Wisconsin and oppose shifting the work to a low-wage nonunion South Carolina plant. Yet another Johnson foot-in-mouth moment. 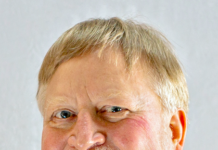 Bill Lueders: When transparency is treated with contempt